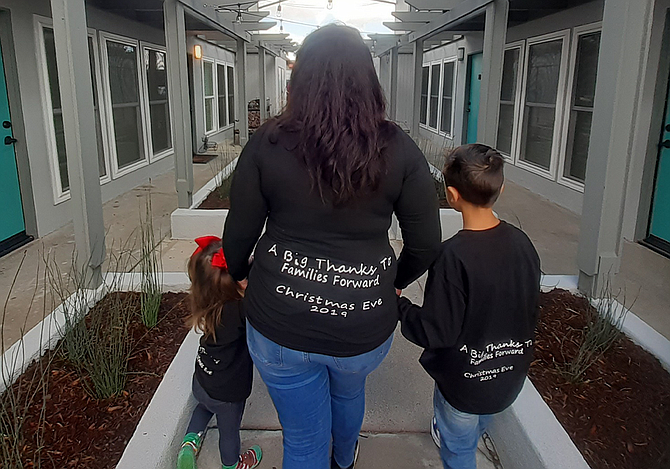 Madelynn Hirneise found herself a quiet spot in the health clinic and picked up the phone.

Outside, the village children played alongside packed-dirt streets and women walked carrying bundles and speaking rapidly in Q’eqchi (Kiche’), the native Guatemalan tongue. Hirneise had spent the previous two years in this tiny Central American town, some 2,500 miles from Orange County; its sounds and sights were familiar. She would miss it.

But right now, with just a few weeks until her scheduled return to the United States, she had to think about other things—namely, her upcoming phone interview with the Irvine-based nonprofit Families Forward.

She aced the interview and was invited to come for an in-person conversation when she returned to the U.S.

That was nearly nine years ago. Today, Hirneise is the CEO of Families Forward, a position she took on 11 months ago.

The nonprofit, formed in 1984 and which the Business Journal estimates to have annual revenue in the $6 million range and counts a staff of more than 50, helps at-risk and homeless families to regain economic independence and find a stable home for their children, among other services.

It’s one of numerous area nonprofits that have stepped up their community efforts amid the pandemic to help families facing housing insecurity and related issues (see this week’s stand-alone Philanthropy Special Section for more).

The group’s annual fundraiser—Light Up the Night—was held Aug. 28. The 36th edition of the event was it’s first-ever virtual fundraiser.

Backed by companies including Futek Advances Sensor Technology, US Bank, TechMD and Sares-Regis, the event raised more than $460,000, the group said last week.

“We had to be creative this year,” Hirneise said. “Instead of postponing our gala, we decided to try something new.”

Hirneise’s years with the Peace Corps are one part of a life journey that has helped her navigate not just the demands of being a first-time CEO, but has also prepared her for leading a nonprofit during an unprecedented health emergency.

Hirneise had the volunteer coordinator position in mind when she interviewed with long-time CEO and founder, Margie Wakeham in 2012.

Wakeham was impressed, recognizing immediately when she met Hirneise —or “Maddie,” as Wakeham affectionately calls her—that she was a self-starter who would help Families Forward in its mission of helping families in need achieve and maintain self-sufficiency.

There was just one issue.

“Margie said I wasn’t quite the right fit for that position,” Hirneise recalls, “but she wanted me on the team. She offered me the position of housing resource specialist. It was a brand new job at Families Forward. There was no framework, no job description.”

“Maddie arrived at Families Forward as a leader,” Wakeham recalls. “She took a new position and idea and developed a housing program that was tailored to each family and at the same time supportive of the many landlords she recruited!”

Hirneise patterned the new program on what other nonprofits were doing, tailoring the program to meet Families Forward best practices. It was a daunting undertaking, but Hirneise had experience building big programs from scratch—she’d spent the last two years doing exactly that in the Peace Corps.

Hirneise was raised by a single mom, primarily in Orange County.

In an all-too-common single mom story, Hirneise’s mom worked three jobs to support Hirneise and her brother. She learned how to be a self-starter primarily by watching her mother. Hirneise helped care for her younger brother while her mom worked, which taught her at an early age the importance of responsibility.

Hirneise majored in international relations at University of California-Irvine, with an emphasis on society and cultural relations. She discovered a love of volunteering and, after graduation, wanted nothing more than to join the Peace Corps.

There was one problem, though; she said she was more than 100 pounds overweight. Hirneise wasn’t able to pass the Peace Corps physical.

This isn’t a story she shares often—not because she’s ashamed, but rather, it’s a part of her life that seems very long ago.

Before the Peace Corps, Hirneise hadn’t necessarily been motived to lose the weight. But now, she’d never wanted anything as bad as she wanted this. She started by becoming a vegetarian, eliminating processed foods and building her diet around fruits and vegetables. She started walking regularly and the weight started to fall off. As she lost pounds, she advanced to short runs. At first, her only goal was to make it through just one song on her iPod. It was very difficult, she recalls, but she never allowed herself to give up.

A year later, Hirneise ran a marathon. Shortly after that, she passed the Peace Corps physical and signed up for a two-year stint.

Hirneise was assigned to Guatemala, where she worked in a small clinic educating villagers on preventative healthcare and vaccinations. Recognizing her drive, her supervisors tapped her to help create a health mentorship program.

The program she helped design invited people from the smallest villages to the clinic. There, they took workshops where the teachers spoke both Spanish, as Maddie did, and Q’eqchi. The villagers—primarily women—learned about women’s wellness, breastfeeding and children’s health.

The Peace Corps experience gave Hirneise an immense sense of achievement. But there is more to it. “It’s also about what you leave behind,” she said.

“Beyond Families Forward she worked with other agencies in the county including the United Way to develop their own housing partners,” Wakeham recalls. “She responded instinctively to the problem, rallied leaders in the political, business and nonprofits sectors to join in finding solutions for the problem with each providing their unique expertise.”

From there, she became the director of property acquisition and management, where she oversaw the operations of the program. Then she was promoted to senior director, where she was in charge of strategic planning.

While she built her professional career, Hirneise built a personal life as well. She married her husband, Sean, an emergency room RN, and had a daughter, Abby, now 2 years old.

She and her husband, both decreed essential workers during the COVID-19 pandemic, lean on each other during these stressful times.

Sean has always been her biggest cheerleader and supporter. So, when Wakeham announced she planned to retire, Hirneise decided to throw her hat in the ring.

Hirneise competed with applicants from all over the country. In the end, her lack of a past CEO title paled in comparison to all she had helped Families Forward achieve.

“Her leadership translated easily to other positions often without much definition and continued to grow into and with the organization,” Wakeham said.

Hirneise was hired as Families Forward’s new CEO last year in August. She spent two months shadowing Wakeham before taking over the reins on Oct. 1, 2019.

When COVID-19 hit in March, Families Forward was in the process of creating a three-year strategic plan. The team, led by Hirneise, had to readjust their timelines to focus on the short-term.

By March 16 they had to close their doors. The next day, the walk-in food pantry became a drive-thru. The in-person services that Families Forward clients rely on were moved online. People scrambled for help as companies shut down and some lost their jobs. The food pantry has been in especially high demand.

At the peak of demand in mid-April, they were seeing 700 families a week. Hirneise reached out to donors and coordinated with community organizations for emergency food donations. A food drive in Lake Forest garnered 18 barrels of much-needed supplies.

Now things are less chaotic, Hirneise said, thanks to her team’s efforts. They’re serving 250 families a week now, still more than three times as many as the food pantry served pre-COVID-19.

For context, 32 families called in February to say they were at the risk of losing their home and heading into homelessness. Fifty-eight reached out in March, 124 in April, 130 in May and 176 in July.

“A lot of the families we’re seeing have never had to access Families Forward services before,” Hirneise said. “Some of these families had high-end jobs. They’ve gone through their savings and are now seeking help.”

CARES Act dollars have helped defray expenses, along with donations from supporters and corporations. Families Forward is relying heavily on volunteers who are making calls to connect clients with housing relief. Employees, most of them still working from home, are taking on additional responsibilities.

Hirneise reflects: “When you’re in crisis mode, you’re thinking about problem-solving. It’s about making sure that at the end of the day, we’re not skipping a beat. I cannot say enough how much I appreciate the team here at Families Forward. They’re the ones who have made it possible to manage this situation as well as we have.”

Hirneise’s professional philosophy is to lead by example, to be authentic, to know that words matter and to embrace change.

“When you are transparent and honest nothing is held back,” she said. “If I’m asking staff to pack a bag, I’ll be packing one too.”

Long before the Peace Corps, Hirneise’s life experiences were shaping the person she would someday become and the leader she is now.

“I have not seen any CEO respond more professionally to the issues developing out of the pandemic to lead a team, find new resources and instill confidence in the Board and community,” Wakeham said.

“There was not a minute to sit back and enjoy. She is a gift to Families Forward and the nonprofit world!”