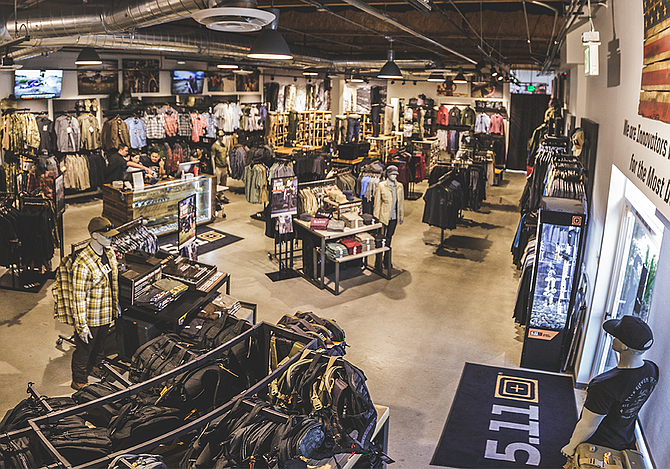 Living up to its “Always Be Ready” tag line has worked well for Irvine’s 5.11 Inc.

The maker and retailer of tactical gear and apparel for military and law enforcement, as well as clothes and accessories for outdoor, fitness buffs and other consumers, has worn the challenges of 2020 about as well as the pants it sells to police officers.

The company, one of Orange County’s largest apparel makers with some 150 local workers and more than 800 companywide, posted a 1.4% increase in sales for the first half of the year, to $183.4 million.

It also reported a profit of $9.3 million over that time, up 25% year-over-year, according to regulatory filings.

Growth—a rarity among apparel retailers this year—has come through a combination of factors, according to CEO Francisco Morales.

5.11 has shifted quickly to meet the changing demand of law enforcement agencies over the course of 2020, while increasingly appealing to the everyday consumer with its utilitarian apparel.

It’s also still opening stores; it counts 73 stores branded under the 5.11 Tactical name now and expects to have 74 open by the end of the year. Its closest stand-alone locations are in Riverside and Oceanside, although its products are also sold in numerous sporting goods stores and other locations, as well as online, with a fast-growing e-commerce business.

“We’ve been fortunate because we have different channels [of distribution],” Morales said of the first half sales growth.

The pandemic’s forced the company to adapt, but it’s also attracted new customers.

Business executives working from home have donned 5.11’s slacks, finding appeal in the functionality of all those pockets to store everything from a cellphone to hand sanitizer.

“We’ve seen a broad demand across all of our products because they’re just utilitarian, they’re easy to care for, and they’re casual,” the CEO told the Business Journal.

Growth has come from some unexpected sources.

The company was stocked at the onset of the pandemic with ballistic plate carriers—think heavy-duty, weighted vests—which in addition to law enforcement and military uses are also worn by CrossFit fitness enthusiasts.

The carriers have been taken up by a whole new wave of gym rats in search of an effective workout during the quarantine.

“We have sold more plate carriers in months than we have sold sometimes in a year,” Morales said.

Its executive team, like Morales, sees more growth on the horizon.

While also navigating the company through a pandemic, Morales said he’s trying to stay true to a longer-term vision he set out when he took over the CEO role.

Although stores shuttered temporarily to the public—they remained open in some cases for essential workers—and corporate employees headed to work from home, the company continued on with its growth strategy once the fury of needs were met in the initial weeks of the pandemic.

With trade shows not happening, the company’s investment has now shifted to technology and enabling digitization that as, Morales put it, “has broken a lot of paradigms,” in an industry that’s used to doing things in person.

“We like to touch. We like to try it out. We like to see it. It takes a lot of personal interaction with the gear and we have had to get comfortable doing that with the iPhone [and] Zoom,” Morales said.

But the work is getting done, and adoption of technology internally has increased, he said.

For example, there’s greater consideration of what can be done in 3D for designing and prototyping product.

“From a corporate perspective, and as we are looking at our next three years, we are looking at how we digitize everything that we do—so that we can continue to work and accelerate and innovate,” Morales said.

Retail expansion continues. About a year ago, 5.11 enlisted a consulting firm to conduct a study concluding the brand could likely support opening around 350 stores domestically. That remains the target.

Sabo said that 5.11 has been able to take advantage of “favorable lease pricing and continued consumer demand” during its expansion push, but noted not every shopping center looking to fill an empty space is the right fit. It’s not, for example, looking for “higher affluence” malls as likely spots, he said.

“We’re not yet opening up 5.11 at South Coast Plaza, for example,” Sabo told analysts. “And nor do I see that as near term in our future.”

There’s also room to grow internationally, where there are only two company-owned stores, although the focus in the next year will be on the U.S., as 5.11 looks to strengthen its brick-and-mortar proposition domestically.

“We don’t want to be just a transactional store,” Morales said.

“We think the days of you just have to go to a store to pick something up, that model is in trouble,” he said. “If you are a retailer that provides education, provides an experience, I think there is a big void in the market for that.”

The average 5.11 store ranges from 4,000 to 5,000 square feet and Morales expects that to stay unchanged. The company’s dabbled in smaller format stores, but hasn’t found it translates into delivering the full on brand experience or assortment it wants to put out for shoppers.

That’s all important even as e-commerce orders surged during the pandemic.

Morales declined to cite the specific increase but called it “substantial.” Compass officials estimated that 5.11’s e-commerce sales as of mid-year were roughly double what they were a year ago.

5.11 is now preparing for what Morales expects to be a strong holiday season, one in which it sees customers, as with any other retailer, loading up on gifts for themselves or others.

Promoting the gear that shoppers will need to be ready is what they’re prepping for, although the contents in this holiday’s shopping bags maybe be a little different, stuffed with items that have become a necessity due to the events of 2020.

“We’ve seen a lot of bags, pouches [purchased],” Morales said. “Things you can rig for your car, so your car becomes your control center with masks, cleaning supplies and disinfectants.”

“When I have to travel now and I have to go to a hotel, you would think a biohazard team has to go in. I’m spraying everything.”