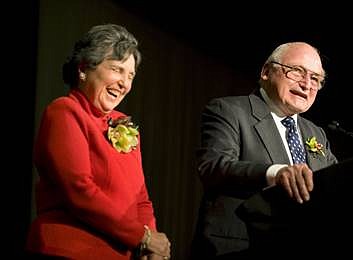 John Stahr, an attorney well known for his involvement with Orange County charities and the area's arts community, died last night, just a few weeks shy of his 88th birthday.

Stahr was founder of the Orange County office of Latham and Watkins, where he practiced for 30 years. He was also a long-time member of the Defense Orientation Conference Association, a forum for business leaders to have continuing education on national security affairs. He was also devoted to his alma mater Stanford University and the Hoover Institute.

Stahr was the chairman of Pacific Symphony where he helped raised funds for expensive instruments that musicians otherwise wouldn’t be able to afford and helped raise more than $500,000 to help complete the William J. Gillespie Organ. He and his wife Elizabeth endowed the Principal Second Violin Chair occupied by Bridget Dolkas.

Among his other charitable efforts, he helped raise funds to build the Newport Beach library and established a fund for the UC Irvine library system. He was also chairman of Arts Orange County during its formative years and later led the board of South Coast Repertory theater.

A memorial is being planned.