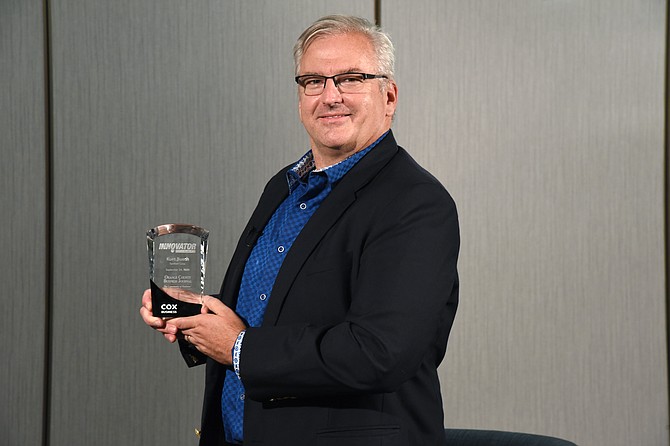 Irvine-based Syntiant said in August it had shipped more than a million units of its processors for voice-activated control of electronic devices.

“For a chip company—for those in the audience that are familiar with chips—usually it takes about five years to do this,” said Busch, CEO of Syntiant and one of five winners of the Business Journal’s Innovator of the Year Awards, held virtually on Sept. 24 (see stories, pages 1, 4, 6, and 8). “We shipped our one millionth unit within the first three years. We are quite excited about that.”

Syntiant’s ultra-low-power chips respond to voice and speech and can wake up a device or have it perform a specific function. They are used to control smartphones, earbuds, smart speakers, laptops, hearing aids, wearables, TV remote controls and dozens of other smart products.

The chips, smaller than a tiny fraction of a penny, are designed for what are called “always-on” battery-powered devices to enable hands-free functions. They aim to make it extremely easy to add voice control to any Internet of Things connected device.

“We really think this could be a pervasive technology,” Busch told the Business Journal, adding that millions more units are coming as the company ramps up production. The company says the chips cost about $1 each for high-volume customers.

The low-power “wake word” offering, which can bring an Alexa electronic assistant back into action, received Amazon qualification in the summer of last year.

“We were looking to build a company in Orange County to be the next great semiconductor company,” Busch said of Syntiant’s beginnings in 2017. “We’ve incubated many great companies here in Orange County but there hasn’t been a new chip company started in about 20 years.”

The new financing brought to $65 million the amount that Syntiant has raised from investors.

“At M12, we’re incredibly proud to support the growth stage of this AI chip company, and to see their customer production volumes ramping,” said Samir Kumar on Aug. 4 in a note posted to website Medium.com.

“And this is just the first generation, with an exciting roadmap ahead,” he said. “Passing 1 million commercial units shipped is a major milestone for any semiconductor company, but it is just the beginning for Syntiant.”

“We’re actually in quite good shape now,” according to Busch, the former president and CEO of Irvine’s Lantronix, who said his new company is “generating revenue now.” He declined to say how much, though the company says revenue for 2020 will increase “exponentially.”

Busch said that Syntiant’s shipment of more than 1 million units of its ultra-low-power NDP100 and NDP101 “neural decision processors” is a validation of the company’s strategy.

The devices are made in the Southeast Asian nation of Singapore and the company said its chips are more efficient than current digital signal processors on the market. “We’re shipping in millions of units now. We expect to ship in tens of millions next year,” Busch said in August.

He expects orders “to ramp even higher throughout the remainder of 2020.”

“Today we are certainly the only player in playing under a milliwatt to make machine learning pervasive,” Busch said. “No one else is really addressing it at the same power performance level that we are.”

Busch said that “generally” Syntiant employees have been working from home because of the pandemic, though about 10 come into the office to work in the labs.

“We’re still hiring in Irvine,” he said. “In the last month we’ve hired seven people.” The company had job postings for seven positions on its website as of Sept. 29.

Syntiant occupies about 17,000 square feet of space in the Irvine Spectrum area.