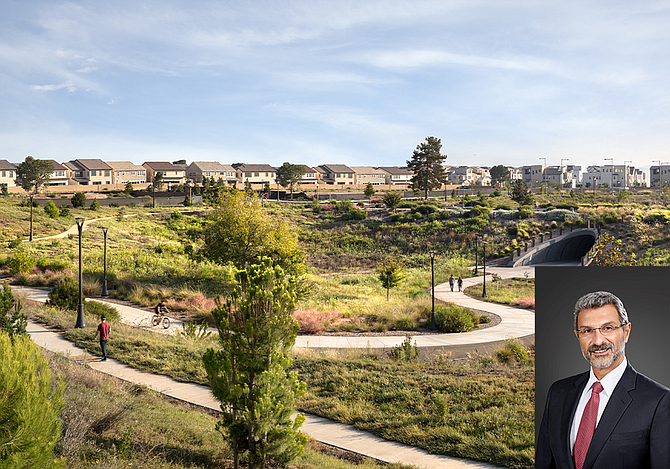 Orange County is looking more attractive as of late, and it’s not just because of the beaches.

Prospective residents and employers increasingly consider markets like OC—suburban areas and regions, like OC, with many but not all of the defining characteristics of the suburbs—as one that may have fewer barriers for the workforce in the wake of COVID-19 than the state’s denser metropolitan regions.

Area business leaders expect the trend to continue even once a vaccine for the coronavirus is made widely available—and even if projections of an out-and-out exodus from major metropolitan areas like Los Angeles and San Francisco prove overblown.

“I’ve always said Orange County is a great kept secret, with many people still thinking of it as a bedroom community to L.A.,” Emile Haddad, chief executive of FivePoint Holdings LLC (NYSE: FPH), told the Business Journal. FivePoint said it has seen steady home sales at its Great Park Neighborhoods in Irvine over the course of the summer, with pricing remaining strong.

“The pandemic is highlighting what I already knew: Orange County has everything going for it.”

That includes resiliency. The region is outpacing the rest of the state in terms of recent job gains.

OC’s unemployment rate stood at 9.9% in August, according to state figures. That’s well up from 3% a year ago but a notable drop from June, when unemployment here approached 15%.

“I am very optimistic about the future employment rate trend here in the county,” Vizio CEO William Wang said last week. “OC’s lifestyle and great weather should be ideal for working from home.”

The county’s lack of a dense, well-defined downtown and minimal reliance on public transportation—once a source of derision from urbanites, but now a must-have for many looking to relocate—is emphasizing a trend that’s been growing in recent years as larger companies look to set up shop, according to a new study from commercial real estate brokerage Cushman & Wakefield.

“As the suburban population grows, occupiers will move more offices to suburbs. COVID-19 could further the move as the barriers to working in the city make suburban space more attractive to workers,” it noted in a recent report.

OC as a whole isn’t considered to be a traditional suburban area; it counts the highest job concentration in the region, despite having few high-rise structures. But with those jobs and population spread across multiple cities, and without one core downtown area, the country’s sixth-largest county by population gets many of the benefits of suburban living that other large metropolitan areas lack.

In 2019, 69% of Class A office net absorption occurred in the suburbs, up from the 10-year average of 60%, according to the report. That trend is expected to continue, it says.

“Suddenly, the suburbs are all the rage,” the report said.

“While we are not convinced that occupiers will need less real estate, we do think that where an occupier’s real estate is located may change in response to the events that have transpired since the arrival of COVID-19,” the Cushman report said.

The vacancy rate for OC’s base of office buildings, totaling some 121 million square feet, ended the second quarter at 11.4%, according to data from Voit Real Estate Services. It stood at 10.6% in mid-2019.

Haddad believes there won’t be a migration to traditional suburbia, but there’s been a burgeoning demand for communities that strike a balance between urban and metropolitan areas.

He thinks Orange County strikes this balance, with a well-developed business ecosystem, thought out master-planned communities and attractive lifestyle amenities, all without the density of larger cities like Los Angeles and New York.

Longer term benefits for the county have been building for some time, bolstered by the area’s “great business infrastructure, diverse company base and a growing economy,” said Strasmann, who works in the brokerage’s Newport Beach office.

“The barriers that make it hard to live and work in urban areas are much less prevalent in suburban markets like Orange County,” said Bob Caudill, an executive vice president at the Irvine office of Colliers International.

The number of home sales in OC were up 3.4% in August from July, and up 13.7% from year-ago levels, according to the latest data from the California Association of Realtors.

The median price of a home sold in OC last month was $930,000, a nearly 15% increase from year-ago levels, according to CAR’s data.

The resurgence in homebuying has been led in part by millennials who now make up the largest homebuying demographic; the National Association of Realtors reports the median homebuying age is now about 33.

Online real estate brokerages Zillow and Redfin are also predicting a suburban boom in terms of future sales, with ongoing remote work trends causing employees to want to work where they live, rather than the other way around.

A May survey from Zillow—whose own workforce in Irvine is largely expected to be at home going forward—found that 75% of Americans working from home would prefer to continue that at least half the time after the pandemic, and many of these individuals would consider moving if they had the flexibility to work from home as often as they want.

Vizio’s Wang notes that his Irvine-based electronics maker is doing well and continues to hire, with most employees working from home.

Not all companies expect their workers to remain at home once a vaccine emerges.

When they return, low-rise offices with surface parking are expected to outperform the market, said Strasmann, since high-rise offices may face continued headwinds as public health concerns continue.

“From the investment perspective, our capital markets teams have seen a lot of interest in low-rise, single-tenant office properties, which are easier to manage, lower risk and they guarantee a steady income stream,” he said. “A lot of this product is located in South Orange County, where much of our region’s new housing developments have also occurred.

“Tenants are increasingly looking to Orange County as a good place to be, largely due to its inventory of low- and mid-rise offices,” Caudill said. “The new low-rise office projects with surface parking are commanding some of the highest rates in the market right now.”

Igor Olenicoff, whose Newport Beach-based Olen Properties is one of OC’s largest owners of low-rise office space, can attest to the trend. He told the Business Journal this summer that occupancy rates for his buildings remain up year-over-year, in the 95% range.

“My bet to stay in mostly low-rise and multi-tenant flex projects is paying off big dividends,” said Olenicoff, who cashed out of his largest vertical property, a skyscraper in downtown Chicago, a couple years ago. “People are downsizing or moving out of the new high-end office towers.”

FivePoint’s Haddad points to mixed-use, master-planned communities as a focal point for new demand in new homes in OC.

Builders clearly see the demand remaining: a trio of companies spent in excess of $160 million in recent weeks on new projects, totaling nearly 1,000 homes, in both South and North OC (see story, page 1).

Haddad’s Great Park Neighborhoods, the 2,100-acre master-planned development in Irvine that’s entitled for some 10,500 homes, offers “the best of suburbia—great parks and schools—while still situated in a dynamic metro area,” he said.

Haddad believes OC still has room to improve in attracting talent and employers.

“If young employees find Orange County boring, they won’t want to work here,” Haddad said. “We are living at a time when companies are chasing talent, not the other way around as it used to be.”

Attracting those types of residents will be a focus of ambitious new projects—potentially holding more than 8,000 homes and apartments—now being planned in the Platinum Triangle by the owners of the Anaheim Ducks, the Samueli family, as well as Angels owner Arte Moreno.

“With land scarce, there will be a lot of space repurposing with underutilized areas going through major redevelopments, such as malls,” said Haddad, one of the first champions of the Platinum Triangle during his prior tenure at homebuilder Lennar Corp.

“The demand is for more live, work and play hubs.”