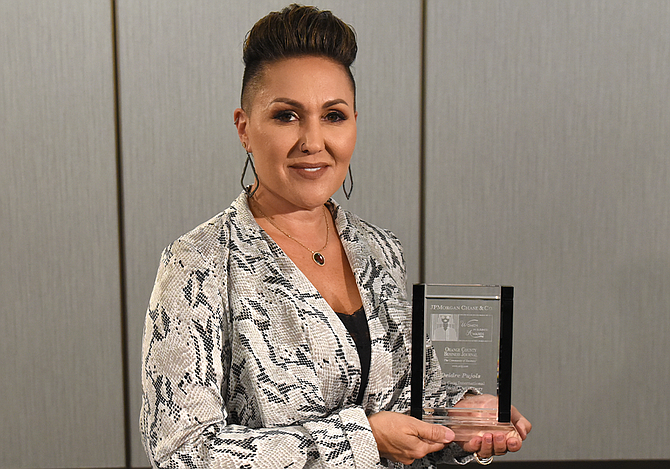 The businesswoman and wife of Major League Baseball future Hall of Famer Albert Pujols is the founder of three nonprofit organizations, all stemming from her desire to create awareness around the causes that mean the most to her.

And just as baseball has a way of bringing people together for one cause, Pujols found a way to connect these causes with the larger Orange County community, and later, internationally.

Pujols’ work inside and outside of Orange County earned her a nod as one of the Business Journal’s Women in Business Award honorees for the 26th edition, held virtually on Oct. 28 (see stories, pages 4, 6 and 8).

“I’m a big advocate of wanting to create global change, but I believe change starts in the home and then goes into the areas that your life impacts, and for us, that’s Orange County,” Pujols said.

“Diedre is more committed, stronger, braver, and passionate about important philanthropic and humanitarian work than anyone I know,” said Annette Walker, the president of City of Hope Orange County and a previous Women in Business honoree.

It started with the Pujols Family Foundation in 2005, a nonprofit that’s largely dedicated to helping individuals with Down syndrome, which her family has personal experience with.

Deidre’s first daughter, Isabella, was born with the medical condition when Deidre was 21, before she met the baseball player. A dedicated single mother, Pujols at one point had three jobs to care for her child.

She married Albert in 2000 when he was 20, two years after the couple met and one year before he made it to the MLB. 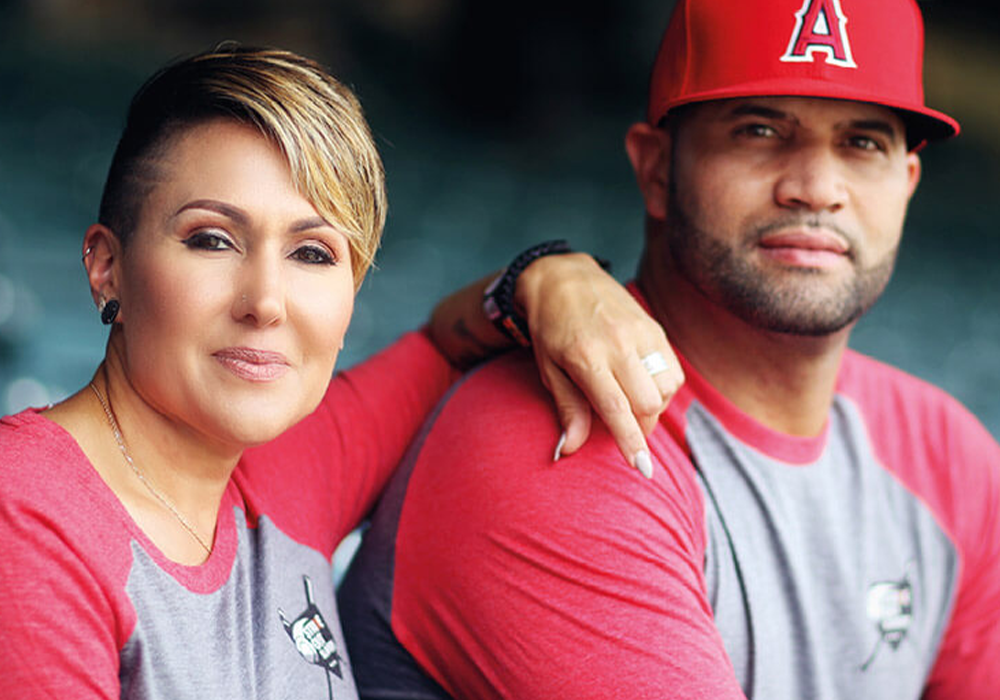 Albert was quick to join Deidre in her push to create education and awareness about Down syndrome, which now has a specific focus on improving the standard of living for impoverished people in the Dominican Republic—where Albert is from—through education, medical relief and tangible goods.

To date, the organization has helped to support 18,000 individuals.

Sponsors for the organization include the Los Angeles Angels of Anaheim, Fox Sports and apparel brand TravisMathew.

In 2016, Deidre became aware of another cause that would later prompt her to form Strike Out Slavery, an initiative that aims to raise awareness of human trafficking, often reported to be the world’s fastest-growing criminal industry.

“This was a more spiritual cause for me, and I wanted to study the issue as much as I could,” said Pujols, who spent the next year traveling the world to learn as much as possible on the topic.

“I took the information back home and thought about what I could do with what I had learned.”

She and Albert engaged the MLB in the effort, bringing on players as advocates for the cause.

Inaugural Strike Out Slavery events were held at Angel Stadium in September 2017 and 2018 through concerts featuring Nick Jonas and Lauryn Hill as headliners, with each year bringing in north of 40,000 attendees.

Strike Out Slavery now counts more than a dozen global partners and 23 local ones. The MLB and the MLB Players Association recently announced they would donate $500,000 through 2021 to support nonprofits, including Strike Out Slavery, that are dedicated to fighting human trafficking.

Pujols has a knack for creating environments that welcome community collaboration, such as her Open Gate International organization that was born out of Strike Out Slavery to take the awareness component a step further.

The Costa Mesa organization was formed to train people coming out of trafficking situations in culinary arts and hospitality, two personal passions of Pujols.

It has since morphed into a general workforce reintegration effort for people from many backgrounds: foster care youth aging out of the system, ex-convicts, victims of domestic violence, and homeless individuals.

The program includes cooking and life skills instruction, an important component “that helps to build confidence and purpose.”

The newly launched Open Gate Kitchen is a restaurant designed to give Open Gate students their first taste of real restaurant work.

Located inside The Hood Kitchen in Costa Mesa, Open Gate Kitchen is described by Pujols as “a social venture that’s an opportunity for the community to come in and participate.”

“In addition to filling up on good food, you’re giving back.”

“Her desire to provide opportunities to those whom would otherwise never get a second chance from society is elevated by her entrepreneurial spirit, limitless vision and her get-it-done mentality,” said Ruben Franco, the president and chief executive of the Orange County Hispanic Chamber of Commerce.