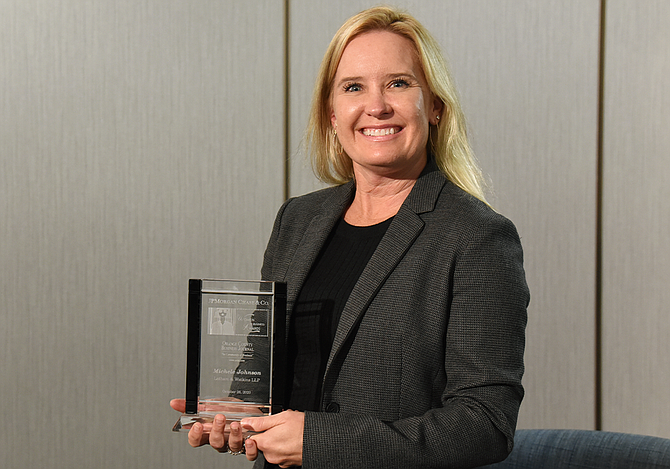 Michele Johnson, a senior partner at Latham & Watkins and one of the country’s top litigators, likes to cite the genius of recently deceased Supreme Court Justice Ruth Bader Ginsburg.

“She embodied this ability to take on the patriarchy by bringing them along with her,” Johnson said, citing a leadership trait she’s looked to follow. “She wasn’t a rabble-rouser; she wasn’t a rioter.”

While rabble-rousing may have its place, Johnson said, Ginsburg “was the one who brought along change little by little by little until she changed the world” and was an “absolute inspiration” to so many like herself.

“She argued a case during our lifetime that allows us now to get a mortgage and buy a house. In our lifetime that was not allowed in this country under the law,” Johnson said of the legal changes benefiting women.

Gingsburg, the second woman justice to sit on the high court, died at age 87 on Sept. 18.

Her legacy lives on among countless women lawyers, including Johnson, who won one of the Business Journal’s Women in Business Awards at the 26th annual event last month (see stories, pages 1, 4 and 6).

It’s just the latest accolade and honor for Johnson; she has been named to the Top 250 Women in Litigation 2020 by research firm Benchmark Litigation, the 25 Most Influential Women in Securities Law by Law360 and the Top Women Lawyers list in California by the Daily Journal.

Latham & Watkins in Costa Mesa ranked No. 5 on this year’s list of largest OC law firms, with 77 lawyers locally.

“I was home-schooled through high school and grew up in a very insular and sheltered family and community, very religious with really traditional views of gender roles,” she said of her childhood in Phoenix.

The upbringing she said could probably be best described as Pentecostal, was expected to make her a stay-at-home mom rather than a career woman.

She eventually “decided to rebel” against her upbringing and picked up “grit” as she traveled her professional path.

In 1995 she graduated from Arizona State University, and was accepted at the Georgetown University Law Center in Washington, D.C., “traveling out there sight unseen.”

She received her JD from Georgetown, one of the best law schools in the U.S., and joined Latham shortly after graduation in October 1998.

She is currently global chair of the Litigation & Trial Department, and the former managing partner of the Orange County office.

Of late, she’s gotten headlines in the sports world by representing the U.S. Soccer Federation in a closely watched discrimination lawsuit brought by the U.S. women’s soccer team.

She remains optimistic that younger generations will break down remaining barriers against women professionals so that “more and diverse groups are better represented at the highest levels.”

Johnson adds: “I feel optimistic given that the newer generations are more used to seeing women in those positions and therefore less used to calling them out or thinking that something is out of place because they’re wearing a business suit and not an apron.”