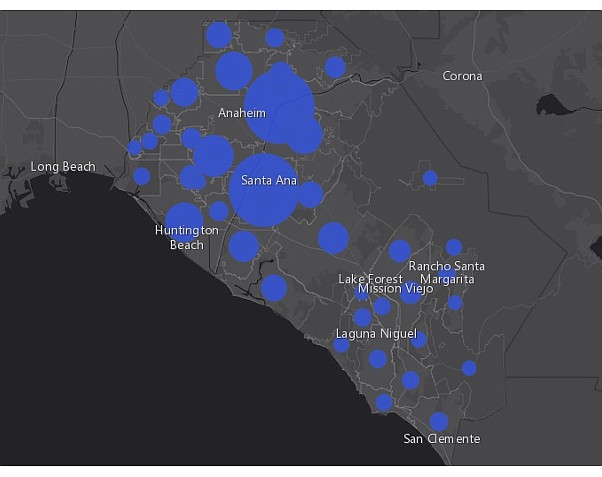 As Orange County faces a summer surge in new COVID-19 case counts that far outpaces the first three months of the virus in the county, some cities are feeling those increases more than others.

Some cities, like Irvine, have seen their case counts jump by more than 70% in the past month when compared with March through May.

Other cities seeing higher-than-typical case surges in recent weeks include Costa Mesa, with 777 new cases in the month ending July 21, representing 79% of the city’s total cases.

Newport Beach and Laguna Beach both saw early jumps in case counts as a result of increased access to testing. For Newport Beach, that surge has been more pronounced in recent weeks, while Laguna Beach’s increase has been less noticeable.

About 74% of Newport Beach’s total 725 cases have occurred in the past month; in Laguna Beach, it’s about half of the city’s 114 cases.

Other south county cities have also seen recent surges, such as Ladera Ranch, Laguna Hills and Laguna Niguel; all three cities have seen their case totals at least quadruple in the past month.

OC hotspots Anaheim and Santa Ana have not seen quite as drastic of a jump; the two cities have 11,139 cumulative cases and about 64% of those cases have occurred since the start of June.