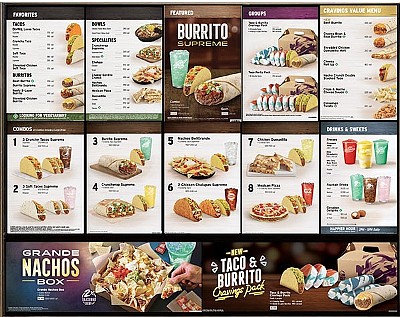 A look at a future Taco Bell menu

The internet and Taco Bell fans are reacting in a big way to Taco Bell Corp.’s recent announcement of changes to its menu.

The Irvine-based company said it’s “simplifying” its menu starting Aug. 13 and that the “evolved” offering is in response to cleaning up efficiencies in how restaurant kitchens are being run, in addition to operations under the new rules of COVID-19.

The announcement garnered plenty of media attention and fans of the brand have since reacted on Taco Bell’s Instagram, largely lamenting the removal of potato-related menu items.

The company said it has spent the past few months not only enhancing food safety and how it runs its restaurants, but that the “new normal has also transformed the way we look at innovation and product testing at our global headquarters.” That means, for example, drive-thru tastings are being conducted rather than in-person focus groups.

The chain said the changed menu will still allow for vegetarian customization and the addition of a $1 beef burrito and $5 Grande Nachos Box.