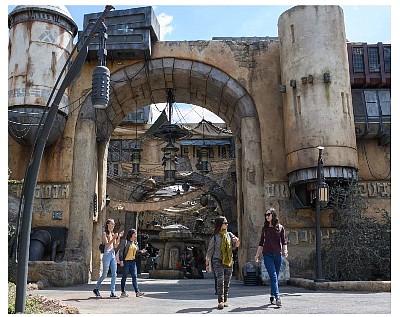 It’s easy to forget you’re in Disneyland as you walk through Star Wars: Galaxy’s Edge, which opened to the public on Friday.

Everything is thought-out, from a new soundtrack from composer John Williams that filters throughout the park to the hundreds of cast members—Disney-speak for employees—sharing the local greeting “Bright suns!” and their own personal space story.

The park’s creators traveled to the Middle East for real-life inspiration for the new world, and it shows in the details.

Stores are reminiscent of Turkish bazaars; cords and lighting and tapestries stream from the tops of buildings and evoke a feeling of culture and history, not an easy feat for a brand new development situated in a soon-to-be 64-year-old theme park.

The famous Millennium Falcon has found its way to this village of sorts.

If Galaxy’s Edge was a concert, that spaceship would be the main act.

“The ship itself is one of the most iconic characters in the entire franchise,” Asa Kalama, executive creative director at Walt Disney Imagineering, said during the media preview held earlier this week.

The starship is a ride and a design focal point; take a picture in front of it, then climb on board.

I took a moment to appreciate the fact that I was able to walk, not inch, through the line, which was an attraction in and of itself. Ramps and walkways take you up through a noisy hangar complete with all the sounds and sights that pump you up to take flight.

Hondo Ohnaka, a Weequay pirate from two of the franchise’s animated television series, is the star of the show, operating a business out of the spaceport called Ohnaka Transport Solutions.

You hear him throughout the queue before you meet him. When you do, he tells you your mission—serve as a flight crew to help him transport cargo—then sends you through to the holding deck and lounge, where the immersive experience begins.

Sit at the Dejarik (chess) table or observe and interact with equipment before its time to board.

Groups of six go through different boarding docks at the same time, a feature that will make wait times a bit shorter.

The main challenge is focusing on everything at once. Perform your required duties, watch what is happening out of the cockpit window, listen to Ohnaka as he barks commands, and enjoy the ride, which takes minutes that feel like seconds.

The ride is reminiscent of the Star Tours attraction in Disneyland, but more interactive, immersive, intense. Pushing buttons and switching levers are encouraged; it’s a childhood (and Star Wars fan) dream come true.

The immersive nature of the ride-game hybrid is indicative of the whole Galaxy’s Edge experience.

Guests can choose to be loyal to the First Order or join the resistance, and are encouraged to use the Disney Parks app to unlock different games and features, like scanning and translating symbols throughout the park, collect virtual items and hack into droids and door panels.

Don’t spend too much of your time on your phone. Take a moment to appreciate where that $1 billion Disneyland spent on Galaxy’s Edge went. The details are just as impressive as the larger attractions, and worth your attention.

For more on the opening of Galaxy’s Edge, see the May 27 edition of the Business Journal, and the upcoming June 3 edition.