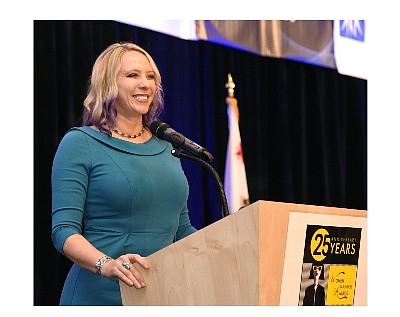 On Sept. 11, 2001, Marlo Brooke woke up to a panicked phone call from her mother, who thought she was flying to Washington, D.C. that morning.

That was the day she decided to start a company “to serve those who serve us and protect us,” Brooke said.

She’s been its chief executive since.

Its customers include the U.S. Navy, for ARMA, or Augmented Reality Maintenance Aid, a program that is currently being contracted for use on its F/A-18 Strike Fighter aircraft.

The software allows Navy mechanics to look at airplanes using a pair of smart glasses, and a phone or tablet, and troubleshoot issues or see if maintenance needs to be performed. It then gives the user a step-by-step guide for how to fix it.

Brooke said it has the potential to reduce maintenance-related errors down to zero.

“From there, we look at how that can improve profit margins and make more revenue for the company.”

Brooke expects revenue between $12 million and $16 million this year.

She was one of five winners at the Business Journal’s Woman in Business award luncheon, held on May 8 at Hotel Irvine (see other profiles, pages 1, 4, 8 and 10).

At the event, she said being a single mother of two and one of the few women-owned defense contractors just makes her even more determined to succeed.

“Business is war, however it’s a war that both sides have to win, and women are naturally peacekeepers,” she said.

After starting her company with small subcontracting jobs in 2003, Brooke said she had trouble getting a loan, so she built the company by being extremely frugal, and declined to take a salary for several years.

“We had no funding, no one would give us a dime. I was advised not to start the company multiple times by multiple people that I thought I respected. It has not been an easy ride,” she said.

Avatar had a great year in 2007, but Brooke said it all came crashing down in 2008 during the Great Recession. Her then-husband lost his job, and Brooke became the sole breadwinner for the family.

In 2010, Brooke was eight months pregnant and went over Avatar’s financials and realized the company would have to close its doors in less than two weeks.

Thirty minutes later, she got a company-saving call—its largest contract to date.

Brooke has purple streaks in her hair and by her own admission cusses like a sailor—which she blames on her military customers.

Though she is a self-proclaimed technophile, her education is in liberal arts.

Brooke believes it’s an advantage for managing her team of engineers.

“I don’t know what’s not possible, so when they say things are impossible, it’s like how else can we approach this?” she said.

Brooke is now aiming to diversify the company’s customer base, and expand into the commercial aircraft and construction industries.

Avatar’s new augmented reality prototype known as “Life of a Wall” will debut on May 28 at the Augmented World Expo in San Francisco.

The AR construction tool tracks shipment of supplies to building sites and uses virtualized computer-aided design models of the building plans, paired with smart glasses, to allow construction workers to see and interact with a virtual scale model of the finished product.

Life of a Wall also uses machine learning to perform quality checks on construction projects as they are put up, to ensure everything is done exactly to specification.

Brooke is a member of the Forbes Technology Council, Women in Defense, and the National Defense Industrial Association.

She said she’s starting a quarterly Orange County meet up for companies and employees in the robotics, AR, VR and machine learning industries to share knowledge, launching this summer.

Next month, Avatar will release its newest product, known as SimplifyXR, which allows anyone, even those without a technical background, to develop augmented reality experiences. Brooke hopes it will encourage more women to get into careers in technology.

“I want augmented reality development to be sexy, glamorous, fun, exciting,” she said. “You are a creator, a designer and those types of things appeal to women, because women create. It’s what we do.”