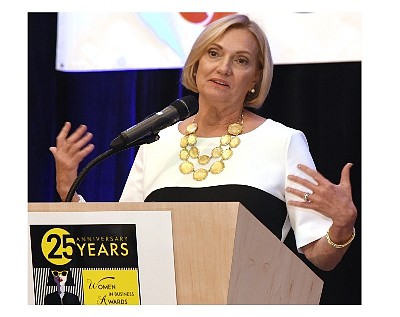 Annette Walker is already one of Orange County’s most prominent business executives, with more than 30 years in the healthcare industry, including a top role at one of the area’s top healthcare systems.

The decision was easy for Walker, who said her plan is always to go “where you make the biggest contribution.”

Her decision could ultimately have an impact on hundreds of thousands of area residents, when factoring in cancer patients and their loved ones.

The goal of City of Hope “is to bring the best cancer care to Orange County and its 3.2 million residents, of whom one in three is likely to receive a cancer diagnosis sometime in their lives,” according to Walker.

Hiring Walker was an easy choice for City of Hope, too.

“[She] knows the value of bringing technologically advanced care, physician expertise, and clinical research closer to patients, families and local employers,” he said.

Walker, who now serves as president of City of Hope Orange County, was one of five winners at the Business Journal’s 25th annual Women in Business Awards held at Hotel Irvine on May 8 (see other profiles, pages 1, 6, 8 and 10).

Walker took on her new role last May; it marked a return home of sorts.

Previously, she was president of strategy for Renton, Wash.-based Providence St. Joseph Health, which has 51 hospitals, 829 clinics and more than 119,000 caregivers across seven states in the western U.S.

While spending a fair amount of time in Washington and OC, she spearheaded the creation of Wellness Corners, a new concept that brought medical and related services to “where people live, work and play.”

She arrived in 2005 when St. Joseph “put a stake in the ground and said, ‘We see healthcare changing, and in order to really make a difference we have to get more proactive about health and wellness and get on the front end of disease development.’”

The proactive approach she undertook to bring healthcare services closer to OC’s base of patients while at her prior job earned her a Business Journal Innovator of the Year award in 2016. It also got the attention of her new employer.

City of Hope is a comprehensive cancer center, a designation awarded by the National Cancer Institute. As of 2017, there are 49 such centers in the U.S.

A time frame for the campus’ construction hasn’t been disclosed. In the meantime, the cancer center will open its first location in Newport Beach later this year, at a medical office next to Fashion Inland that it bought. The 12,500-square-foot facility at 1601 Avocado Ave. will be the first spoke of the main health campus planned for Irvine.

Walker said the center’s unique approach to care and its ability to deliver advanced technologies and the newest drugs will benefit local patients.

City of Hope has a 116-acare main campus in Duarte, and focuses on research such as how biology affects diseases like cancer, AIDS and diabetes, as well as speed up the conversion from research discoveries into cures.

Hundreds of OC patients make the trek to Duarte every day for treatment.

As in the case with the Wellness Corners, having a dedicated cancer center in OC will bring treatment closer to City of Hope’s patients, making people’s lives easier.

The Loyola Marymount University biology major, who later proceeded to complete a master’s degree in healthcare administration at the University of Minnesota, said she wanted to be in leadership early on in her career because she wanted “to impact the overall, larger structure clinicians work in.”

She has served on a wide range of boards over the past 15 years. She presently serves on the finance committee of the Diocese of Orange and the Orange County Business Council.

While a strong advocate of women in business, she said it’s not gender that determines a great leader.

“Great leaders are great leaders, whether they are women or men,” she said.

Walker has 12 grandchildren and said she balances family and work with a motto of embracing “yes.”

“I have a personal philosophy that God wants to bless us to an extraordinary level, and all you have to do is say ‘yes,’” she said. “I think sometimes we put restriction on our own abundance and saying that it’s not possible.”

She enjoys walking and hiking. Last year, she and her husband, Chuck, walked the Camino de Santiago, a 500-mile trip across northern Spain.

“The most important decision in your life, if you are going to have a family, is who your partner is and how your partner sees things, sees life,” Walker said.

“They say ‘Behind every successful man there is a woman,’” she quipped at the award ceremony before noting that the man behind her success “is my husband.”

She added that the couple, who have six children, recently celebrated their 39th wedding anniversary.