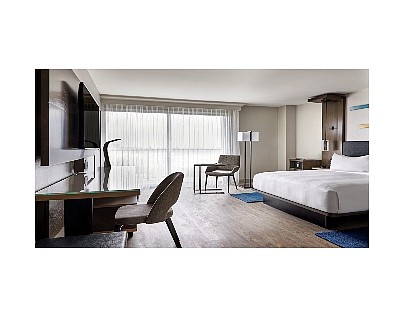 The hotel’s 1,030 rooms were redesigned with modern furnishings in grays and blues for its largely business travelers—or “executive nomads” in Marriott lingo.

The renovation also added two new grab-and-go restaurants: Slice Pizzeria and The Market. The two eateries join nFuse Bar + Kitchen, which opened in 2015 as part of a previous, $15 million renovation.

The four-star hotel is on the Anaheim Convention Center campus where Natural Products Expo West—the venue’s second-largest show, with more than 85,000 attendees annually at ACC—recently ended. Upcoming events at the center include WonderCon, at the end of the month.