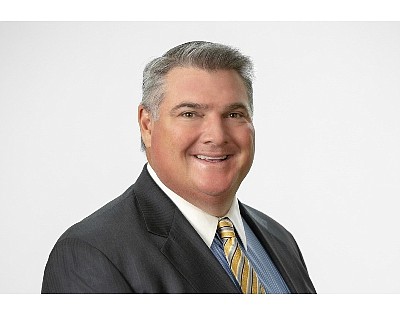 Editor’s Note: Steve Jones began working at Universal Protection Service in 1996 when it reported about $12 million in annual sales. He’s since built the Santa Ana-based firm, now called Allied Universal, to the largest U.S. security firm with a workforce of 210,000 and an estimated $7 billion in sales this year. The following is an edited excerpt about his first day on the job from his recently published book, “No Off Season, the Constant Pursuit of More.”

We arrived at a restaurant and met the folks from an Orange County-based real estate company that at the time was Universal’s biggest and most important client.

Universal President Brian Cescolini introduced me to everyone, saying, “This is Steve. We just brought him on board. He’s a bright young man and he’s going to help us bring the company into the future. Everything we’ve done for you to date, we’re soon going to be able to do for you so much better.”

The real estate representative smiled like it pained her and then said to me, “I’m sorry to do this to you on your very first day, but we’ve been with Universal for some time now and we thought it was important to meet with you in person to let you know that we’ve decided to cancel our contract with you.”

Not even half way through my very first day and my company’s very biggest client had decided to give us our walking papers.

No one knew what to do, including Brian.

The silence and the awkwardness were excruciating. In the midst of it all, I realized that if someone was going to do something to fix things, it was going to fall on me.

Even at that point, I had been in business long enough to realize that there were a number of ways that people in my position might react to such a situation.

The first would be just a passive acceptance of their decision. “We’re sorry to hear this, but we respect your decision.”

Another—and one that I’ve found is far too common with many people in business, even among executives at the highest level—would have been to play the (passive-aggressive) victim game. “Really? After everything we’ve done for you over the years, this is how you end things?”

The third, I suppose, would have been just plain aggressive. “This is b.s.!”

I didn’t make any of those plays.

I certainly wasn’t going to simply accept the fact that the most important client to the company I had just joined (and what I intended to one day have an ownership interest in) was going to walk out on our lunch and take their business with them. But I wasn’t going to plead either. Pleading never works, not really.

I certainly wasn’t going to get angry. Anger never works either.

What I did do was to take a breath and made a statement that I knew would be persuasive because it was absolutely, 100% true.

“This is my first day. I don’t know you and you don’t know me. But I will tell you that I’m smart and an extremely hard worker and I need you to give me thirty days to fix this. If you’ll tell me why you’ve reached this decision, what exactly you’re dissatisfied with, and if I don’t fix it for you within thirty days, you can always terminate us then. In the long run, thirty days won’t matter to you one way or another. But if you just walk away right now without giving me this opportunity to repair our relationship, then you’re going to be walking away from the company that is going to set the standard in the security industry—a security company that is going to be completely devoted to exceeding all of your expectations from here on in.”

The company’s property manager was so impressed by my direct, no-nonsense handling of a situation that might have triggered some other young executive into a panic that she gave me those thirty days I’d asked for.

I took full advantage of the opportunity. The first thing I did was ask their representatives to let me know everything that had left them dissatisfied with the services we provided to them. It was a long conversation. Then I went and fixed them. And at the end of thirty days, the real estate company agreed to continue the contract and is still a customer today.

But that wasn’t the end of it. If our largest and most important client had issues, then I was certain that all of our clients had problems with us.

Day after day, I reached out to every one of our customers and set up meeting after meeting, talking to every client until I was certain that I knew what problems existed with every contract. And then I took all of the comments I had acquired and set out a plan of action to address them all.

I went through the list methodically and I didn’t stop until I had taken all of the steps necessary to correct each and every one of them.

The information that every business really needs lies within the complaints.