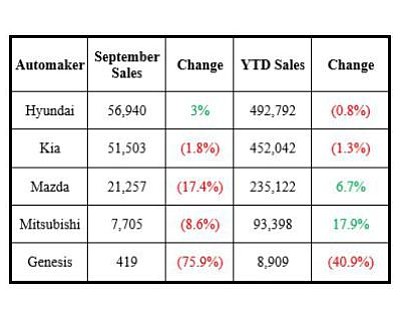 Nearly all of the OC automakers reported a drop in September sales on Tuesday with the exception of Fountain Valley-based Hyundai Motors North America.

Sales of its luxury brand Genesis sold 419 units in September, an 80% drop from the same period in 2017. For the year, sales also declined about 41% to 8,909 vehicles. Hyundai in March decided to stop Genesis imports to clear inventory as it works on relaunching its dealership model next year.

Cypress-based automaker Mitsubishi Motors North America also reported a decline for the month selling 7,705 units, down 9%. It reported year-to-date sales of 93,398 units, up 18%.