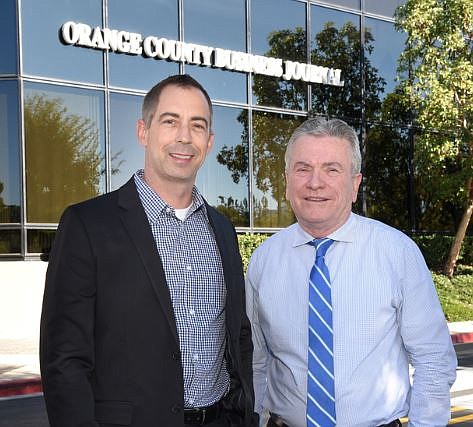 The Orange County Business Journal is making changes to its editorial department.

Mark Mueller has been named editor of the paper, while Peter J. Brennan has been promoted to executive editor, a newly created position at California’s second-largest weekly business publication.

The duo, who together have more than 40 years of business reporting and editing experience, will oversee production of the weekly newspaper and its daily news website.

“I couldn’t be more excited having the dynamic duo of Mark and Peter continue the tradition of editorial excellence that has made the Business Journal the anomaly in print media, a publication that continues to thrive. We take delight in frustrating the disrupters,” said Publisher Richard Reisman.

Mueller has served as real estate reporter of the Business Journal since 2005, and has also taken on the news editor and senior editor roles. He estimates having his byline on more than 2,500 print stories during his Business Journal tenure, including nearly 1,000 front-page stories.

Brennan, who has worked for the Business Journal for nearly five years over two stretches, is currently financial editor. He worked at Bloomberg News for 15 years, where he covered tech icons, such as Steve Jobs and Michael Dell. His headlines and articles sometimes moved the market cap of companies by hundreds of millions of dollars.

Brennan also spent a decade in Latin America, working for English-language newspapers in Venezuela and Costa Rica and as a correspondent for publications including the Washington Post and the New York Times, and networks, such as CNN.

Both Mueller and Brennan plan to continue writing breaking news stories, features and columns for the paper, along with filling their new editorial roles.

“I’ve had the great fortune to work alongside a number of fabulous journalists here at the Business Journal,” Mueller said. “Both Peter and I are excited to lead our staff of skilled journalists, and we will work hard to ensure that OC’s dynamic business community gets the coverage it deserves.”

Brennan said, “Orange County has an economy the size of Finland’s and is full of many dynamic executives. I look forward to continuing to tell their stories.”

Pete Weitzner will be telling those stories as well in his role as contributing editor.

“Pete’s an active ‘Insider’ in the business community. He’s led a number of groundbreaking stories and is a great fan of the staff. We’ve learned a great deal from him and look forward to his future work for the paper,” Mueller said.

Mueller is a graduate of Bucknell University in Pennsylvania, where he earned a bachelor of science degree in business administration, minoring in English literature. He moved from Washington D.C. to Orange County in 2004, initially living in San Clemente. He still can’t surf. He now lives in Irvine with his wife, Angelina, and daughter, Isabella.

Brennan won a Kiplinger Fellowship to earn a master’s in journalism at The Ohio State University and earned bachelor’s degrees from San Francisco State University. He lives in Irvine with his wife, Cynthia, and daughter, Nicole. n