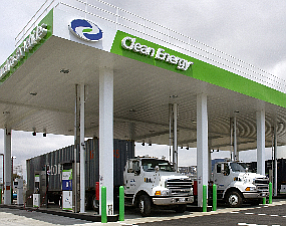 Investors pushed up shares more than 13% in afternoon trading to a market value of $329.4 million, seizing on news that Total SA in Paris agreed to purchase up to 50.8 million shares of Clean Energy common stock for $83.4 million, becoming its largest stockholder with a 25% stake.

The transaction must be approved by shareholders at their stockholders’ meeting, which was rescheduled for June 8.

Clean Energy, backed by a $100 million credit line from the global oil and gas giant, also announced plans to launch a leasing program aimed at placing thousands of new natural gas trucks on the road and fueled at Clean Energy stations across the country.

Clean Energy is the nation’s largest builder and operator of natural gas stations in the nation, though it has struggled for profitability for much of its history.

The company projects a net loss of $20 million to $25 million this year, in line with Wall Street expectations.

Legendary oilman and corporate raider T. Boone Pickens started Clean Energy in the late 1980s as a tiny part of his Dallas-based Mesa Petroleum, and split off a decade later.

Pickens, the founder of BP Capital, is the company’s largest inside shareholder, controlling about 13 million shares, or a roughly 8.6% stake, according to filings with the Securities and Exchange Commission.

The company is scheduled to report first quarter financials after the close of intraday trading.

The latest developments come as oil prices have risen above $71 a barrel, a nearly four-year high—fueled in part by President Donald Trump’s decision to pull the U.S. out of the Iran nuclear deal and likely impose new sanctions on Iran’s economy and oil exports.

Iran is the third largest producer in the Organization of the Petroleum Exporting Countries, or OPEC.

Brent crude could surpass $100 a barrel next year, Bank of America analysts warn.