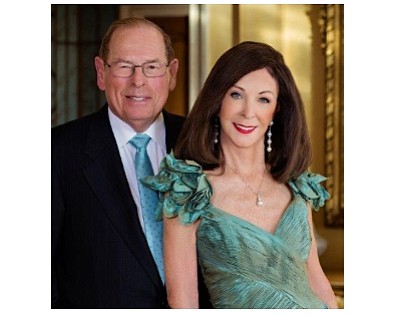 George and Julia Argyros have given $7.5 million through their family foundation in Costa Mesa toward the renovation of the Los Angeles Coliseum and a peristyle plaza will get the couple’s name.

The Coliseum is home to USC football. Their daughter, Stephanie, is a Trojan grad and on USC’s President’s Leadership Council and its Keck School of Medicine board. Another daughter, Lisa, is the parent of a current USC student.

The family has given to USC previously—George Argyros is known for a commitment to private higher education, including at Chapman University—and to projects outside OC, though it remains focused on local projects, including youth and arts efforts. Recent OC recipients include the Girl Scouts and Segerstrom Center.

“USC's principles match ours, including their commitment to children and education," Julia Argyros said through a spokesperson. “We’re proud to be working together with the community to restore the beautiful Coliseum.”

USC said last year the facility would be renovated in a $270 million, privately funded project.

Planned work includes restoration of the arches and columns of the peristyle, build in 1923 and unveiled at the 1932 Olympic Games.

Two large video boards installed for the 1984 Olympic Games will be removed, damaged travertine limestone tiles and a decorative mural below the center arch restored, and the entire structure cleaned.

Diane Haithman is a reporter for our sister publication, the Los Angeles Business Journal, where a version of this item first appeared.