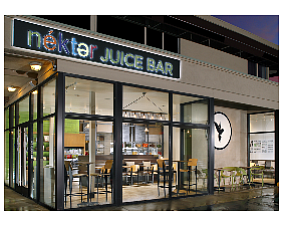 A Nekter Juice Bar franchisee plans four locations in Florida this year, a new state for the juice bar chain.

Nitin Solanki expects to open locations in Coconut Creek and Aventura in the spring and West Delray Beach and Coral Springs later this year under the Solanki Co. LLC.

Santa Ana-based Nekter has been expanding on the East Coast. It said in August that a Carolinas franchisee will open 17 locations over the next several years; the first two opened in Charlotte and Cornelius last month.

Nekter was No. 26 on the Business Journal’s 2017 list of restaurant chains with about $43 million in annual systemwide sales and 77 locations at the end of 2016.

It now has some 90 locations in nine states: California, Arizona, Nevada, Texas, Utah, Colorado, Washington and North Carolina. In addition to Florida it plans to open in Georgia, South Carolina, Louisiana, New Mexico, Ohio, Tennessee, and the Washington D.C. metro area over the next few years.

2016 average gross sales for Nekter were $762,000 for company-owned locations and $837,000 for franchised ones; earnings before interest, taxes, depreciation and amortization were about 20% and 16%, respectively.

Nekter gets 8% of a franchised units gross sales for royalties and advertising.