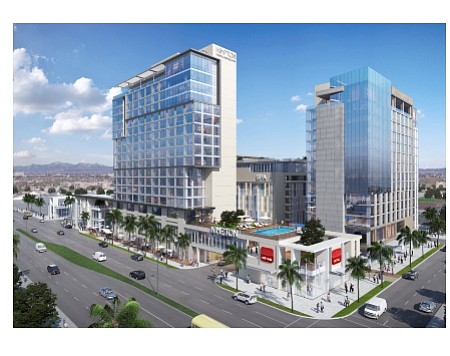 A Kimpton and a Le Meridien are two of the three hotels coming to a 5-acre site, next to a Target store and across Harbor Blvd. from the Hyatt Regency Orange County, in Garden Grove.

The Kimpton and Le Meridien brands were named by Mayor Steve Jones at the State of the City lunch yesterday, an event presented by the city’s chamber of commerce.

Le Meridien will get about 400 rooms in one tower on the property; Kimpton Hotels & Resorts in San Francisco will have a “four-star 200-room” hotel in a second building, a release said.

Harry Pflueger of Newport Beach-based Maxim Hotel Brokerage, which has worked on the development deal, said a third hotel will be “boutique or lifestyle” and hasn’t been decided yet.

Meridien is a Marriott flag via the Bethesda, Md.-based hotel firm’s $13 billion acquisition of Starwood Hotels & Resorts in 2016. Kimpton is part of U.K.-based Intercontinental Hotels Group.

Huntington Beach’s Shorebreak is a Kimpton, and the hotel manager is on tap to run Capistrano Hotel in San Juan Capistrano but that project has been delayed by legal battles.