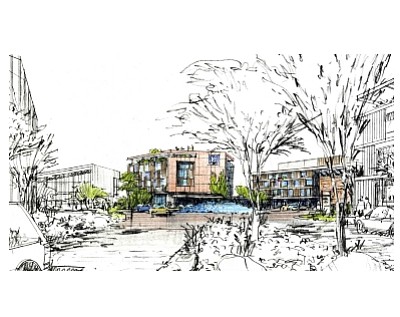 Five Point Chairman and Chief Executive Emile Haddad said he envisions it “elevating the experience” at the master-planned community.

“From our perspective, we’re building a small city,” he told the Business Journal last week. “That’s what we do as a company. [This] is part of the whole lifestyle” the company wants to foster.

Five Point is the parent company for the project, Newhall Ranch north of Los Angeles, and San Francisco Shipyard/Candlestick Point in San Francisco, the latter two in entitlement or development.

A combined 40,000 homes and 21 million square feet of commercial space is planned for the three projects.

Apart from an amphitheater and a 175-acre sports park, the cancer center is the first nonresidential, nonoffice project in the Great Park community and the first in Orange County by City of Hope, whose parent company has 17 other Southern California facilities.

Haddad said the medical campus will also have a general outpatient clinic, medical offices, a senior housing/assisted living facility, homes for employees, and an area for religious/spiritual use.

None will be inpatient, Haddad said. A small hotel will allow people who need extended care, along with their families, to stay nearby.

He said that in talks with the medical community, he saw that service is “moving more toward an outpatient experience,” which industry groups call 23-hour care—patients come for the care needed without checking in.

“We’re not at this point thinking of a hospital,” Haddad said.

Five Point will do some facility development and work with “healthcare providers in [their] centers of excellence in different areas” in “collaboration that elevates the whole.”

Atlantic Group in February for $9.3 billion, owns about 40% of Five Point.

Five Point reported quarterly revenue of about $22 million, mainly from “the sale of remnant parcels [and] management services and … builder fees” and $105 million in “other income” resulting from 2017 tax reform.

Three communities with 2,700 homes—Pavilion Park, Beacon Park and Parasol Park—are 90% to 100% sold out.

City planning documents show an affordable housing project of 723 homes is also in the works.

Haddad said in a press release that 2017 proved “transformational” with its IPO and raising development funds. In addition to the IPO, Five Point sold $500 million in unsecured senior notes in a private placement in November.

“The combination of vibrant job growth and limited housing supply in our core markets bodes well for our land portfolio heading into 2018.”