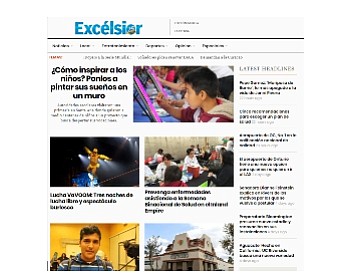 Southern California News Group launched ExcelsiorCalifornia.com as the “go-to digital Spanish-language news source” for Orange, Riverside, San Bernardino and Los Angeles counties. The website has topics of interest to Latinos, as well as state, national and international news from Mexico and other Latin countries.

The website launch follows enhancements to the content, design, distribution and branding of Excélsior’s print editions in June. Excélsior Orange County began a yearlong celebration of its 25th anniversary on July 7. The website launch was delayed by a few months while the news group worked on its English-language website redesigns, including the Orange County Register’s, a news group spokesman said.

Total audited distribution for Excélsior is 392,557, with targeted distribution that includes a mix of home delivery and news racks in Hispanic-dominant communities, according to the news group.