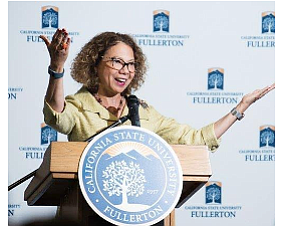 Garcia will leave Fullerton at the end of January. She became the seventh president in school history in June 2012.

The association she will lead is an organization of state-supported colleges and universities that offer degree programs leading to bachelors, masters and doctoral degrees.

“Millie has been one of California's strongest advocates for public higher education,” White said in a statement.

“We will miss her leadership in the CSU, I look forward to continuing to work with her in her new role."

White, Garcia, her leadership team and members of the Fullerton campus community will now discuss the appointment of an interim president, according to the chancellor’s office, and the statewide system will conduct a national search for her successor.