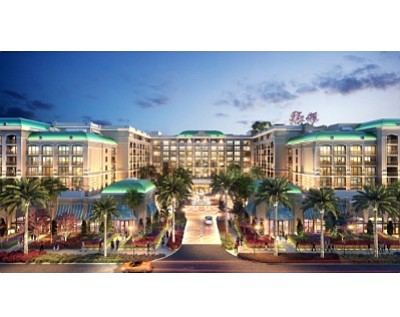 WAR is the under-construction, $250 million hotel on the site of the former Anabella Hotel, next to Anaheim Convention Center.

The ‘four-diamond level’ property is expected to open by 2020 with 613 rooms, 42,000 square feet of meeting space, three restaurants and a rooftop bar.

Iommazzo replaces acting GM Tina Riley, who had served in the role since October 2016 and is director of sales and marketing at Anaheim Hotel, a lower-end, 302-room hotel on Harbor Boulevard, across from Disneyland Resort. It’s owned by a Wincome affiliate and is also slated for eventual high-end renovation. Riley’s been with Wincome for seven years.

The last full-time GM of the Anabella was Nathan Fitzgerald, a 12-year Wincome veteran who is currently GM at Anaheim Hotel.

Iommazzo was most recently GM of Kahala Hotel and Resort in Honolulu, run by Landmark Hotels Group; prior to that he was GM at Makena Beach and Golf Resort in Maui. He’s also worked at hotels in San Diego and Australia.