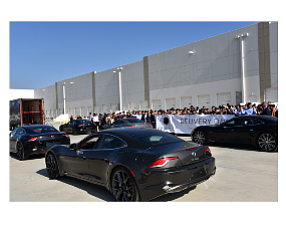 The first batch of Karma Automotive LLC’s Revero luxury plug-in hybrid vehicles is on its way to 10 dealer showrooms in the U.S. and Canada.

The Costa Mesa-based automaker held a private “Delivery Day” event Friday at its 556,000-square-foot production facility in Moreno Valley, with more than 800 employees in attendance.

“Karma has moved from a product development company to an automotive manufacturer,” Chief Revenue Officer Jim Taylor said in a statement.

Karma Automotive launched the $130,000 vehicle in September with some 80 orders on the books but did not set a firm delivery date.

“It’s just ‘when it’s ready,’” Taylor said at the time. “We aren’t in a private equity situation like the prior guys … We’ve got an owner that’s got patient capital. He’s in this for the long haul and the first thing he told us is ‘just get it right.’”

The automaker was known as Fisker Automotive and Technology Group LLC before Wanxiang Group Corp.—one of the largest auto parts makers in China—bought it in a 2014 bankruptcy court auction for $149 million in cash. Wanxiang also owns Fisker’s former lithium-ion battery maker, A123 Systems Inc., which it got in 2013 for about $256 million.

The Revero, is powered by electricity, gas and solar energy and can hit 60 miles per hour in 5.4 seconds.

Orders are placed online and, based on state franchising laws, will be delivered through a network of 10 dealers—four of them former Fisker lots. The automaker is also developing a “Branded Experience Center” at its future corporate headquarters in Irvine.