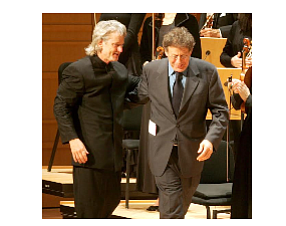 Pacific Symphony will make its debut at Carnegie Hall in New York City in April 2018 with a special program dedicated to composer Philip Glass.

Pacific Chorale—a fellow resident of the Renée and Henry Segerstrom Concert Hall at Segerstrom Center for the Arts—also will make its Carnegie Hall debut alongside the symphony.

Glass is Carnegie Hall’s 2017-18 composer-in-residence. He holds the Richard and Barbara Debs Composer’s Chair there. U.S. orchestras were invited to submit programs featuring important works by Glass in “illuminating contexts” to honor his residency.

The Louisiana Philharmonic Orchestra was the other orchestra chosen to perform during Carnegie’s upcoming season. Glass had a hand in choosing both.

Pacific Symphony said it will announce this spring a patron trip for the Carnegie Hall concert. Single tickets to the performance go on sale through Carnegie Hall on Aug. 28.

The orchestra will perform the same concert in Orange County shortly before its Carnegie Hall performance.