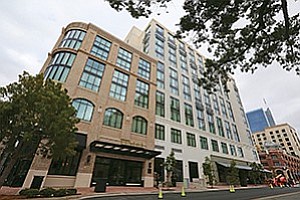 The $120-million, 317-room San Diego location is the first Pendry; a second is set to open next month in Baltimore. Pendry aims at a slightly lower price point than the Montage resorts—$300 to $400 a night compared with resort rates that run $500 a night and up—and are expected to attract a younger clientele.

Pendry San Diego has six on-site restaurants and bars, including the upscale Lionfish seafood restaurant and Nason’s Beer Hall, a German-style pub and bar named for Nason & Co. Farmer’s Market, a grocer that occupied the site for much of the 1900s.

The hotel displays local artwork and historic photos, and a rooftop pool deck and outdoor meeting space has views of downtown; the Pendry has some 35,000 square feet of meeting space, including an 8,400-square-foot ballroom, and employs about 400.

Pendry San Diego was previously a parking lot; it took five years of planning, finance, design and construction to complete.

Hirsh is a reporter for our sister publication, San Diego Business Journal, where a version of this article first appeared.