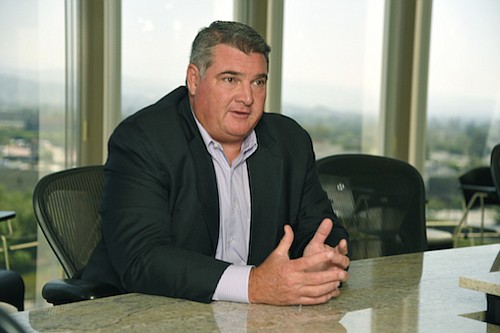 If Allied Universal, a security company with 150,000 employees, was an army, it’d be the 34th largest in world, right behind Japan’s.

“Just the ability to communicate what you’re doing and why is challenging,” Chief Executive Steve Jones said from the sixth-floor conference room of his headquarters overlooking the Costa Mesa (55) Freeway in Santa Ana.

Jones has taken a company that generated $12 million in annual sales when he joined it in 1996 to an estimated $5.3 billion this year. His mastery of revenue growth could very well be a case study in business school. In fact, one of his investors, Partners Group, was so pleased with tripling its investment return that its website cited Jones’ company as a case study.

The biggest deal was a year ago when his Universal Services of America merged with AlliedBurton Security Services. The merged company is the largest security firm in the U.S. The new employee count is just behind Boeing Co., which ranks 43rd among U.S. employers, according to a Fortune 500 list.

“It’s been a heck of a year,” Jones said. “We tried to accomplish in six months what it takes most companies 12 to 24 months.”

He hasn’t stopped acquiring companies. In the year since the merger, the combined company has made another five acquisitions of companies with $398 million in annual sales and 12,000 employees.

Allied Universal, with about 200 offices nationwide, provides guards for financial institutions, office buildings and shopping malls. The company promotes its ability to provide security services on a national scale; about half of the nation’s Fortune 500 companies are clients.

Jones sees plenty of opportunity in markets like Texas and Canada and sectors like education and residential communities. He said he believes technology such as an Uber-like app can add another $1 billion in annual sales (see box, this page).

Jones, who was never a security guard, earned his MBA at night school from the University of Redlands after obtaining a political science degree from California Polytechnic University-San Luis Obispo.

While working at a prior job in the trash collection industry, Jones admired how Waste Management bought local companies and implemented similar systems and branding, such as painting its garbage trucks the same green color.

He saw the same opportunity to grow a security guard business, a fragmented industry with about 10,000 companies.

Jones’ modus operandi is to identify a potential geographical area, acquire a key local security firm, install standard processes, and begin local expansion. About $3 billon of the company’s revenue has come through expansion while the rest is organic, Jones estimated.

“A big reason we’ve been successful is we’ve been able to duplicate our culture, our services and our delivery methods across the country,” Jones said.

The industry’s wages start around $12 to $15 an hour. At any one time, the company is looking to hire around 10,000 to 15,000 employees, either because of turnover or growth. The company has about 4,000 employees in Orange County.

Allied Universal is trying to change the image of hourly transient jobs by calling employees “security professionals” instead of guards. It touts potential career advancement; Jones said there are thousands of supervisory roles available for promotion and that it has senior vice presidents who started as guards.

In 2009, Partners Group of Switzerland began investing in Universal’s corporate debt and in 2013 became majority shareholder. The companies worked on reducing turnover, which can be 40% to 60% in the industry. The cost of hiring and training each guard is $500, and a reduction in turnover could increase adjusted earnings by 3%.

At the time, the security industry featured large companies that weren’t nimble and a lot of small companies that lacked the capability to grow, said David Layton, who oversaw the investment as head of private equity for Partners Group. When an industry like security isn’t known for growth, a great management team can make the difference, he said.

“We felt Steve and his team could shift the scene in that sector,” Layton said. “Universal was the only medium-size company acquiring during that period of time. We saw an opportunity to build a national platform.”

Partners Group sold its majority stake in 2015 to Warburg Pincus LLC. Partners Group reported in its annual report that Universal generated a return of three times its initial investment.

That same year, Blackstone Group, a private equity owner of AlliedBarton, sold the company to French investment firm Wendel SE, setting the stage for a merger. Last year, Universal and AlliedBarton agreed to merge, creating a company with $4.5 billion in annual sales and 140,000 employees.

Wendel and Warburg Pincus each own 33% while Partners Group retained a stake. Jones is the largest individual shareholder. More than 100 in management are partners who also own shares in the company, Jones said.

Wendel’s website said Allied Universal is looking to continue acquisitions in the range of $30 million to $250 million.

Jones has become so adept at acquisitions that he didn’t think the merger with AlliedBarton would be too difficult.

“On paper, it seemed easy,” he said. “The change-management aspect is always more difficult than you think it will be.”

The merger is 95% complete, with some back-office technology scheduled to be done by the end of the year, he said. The company projects that it will finish the year with $5.3 billion in revenue, almost $1 billion higher than the $4.5 billion reported when the two companies combined a year ago.

The U.S. industry for security guards is around $40 billion to $45 billion annually, of which $20 billion is in-house and $25 billion outsourced, Jones said. If security for cyber and infrastructure is included, the industry may top $100 billion. Competitors include Securitas USA, which has 88,000 guards, and G4S, which has more than 50,000.

Demand for security is increasing due to theft of intellectual property, workplace violence, terrorism, and municipalities having a tough time staffing their local police, said Jones.

“Executives are thinking about keeping their people safe in their work environment and what can damage their brands,” he said. “That keeps CEOs up at night.”

In about two to four years, Jones and his partners may consider an initial public offering. While its profit margins are in the low single digits, they can be improved through scale, Jones said.

“It is a low-margin business, but it is steady,” he said. “We think it will make it an attractive IPO.”