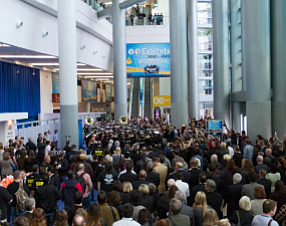 The 200,000-square-foot Anaheim Convention Center expansion has driven official notice by its biggest client that it, too, is in growth mode.

ACC’s addition—dubbed “ACC North”—will bring its meeting space square footage to a bit over 1 million; the expansion is scheduled to open September 26.

“A new area of the show” will be devoted to event technology, according to a statement, and education programs will be concentrated on four floors of Hilton Anaheim, which flanks the ACC and is OC’s largest hotel by room count—about 1,575—and indoor meeting space—140,000 square feet.

NAMM’s statement suggested stronger organization and traffic flow for the show’s sections—from percussion to piano, education to technology, and the new Parnelli Awards for people and firms that produce live events.

The release didn’t specify show growth from the ACC expansion, noting that it draws “over 100,000 attendees from 139 countries and regions” but NAMM and industry trade journals have reported increases in each of the last three years of 2% to 8% in exhibitors and attendees—with no additional space available:

NAMM has been a prime mover of several Anaheim Convention Center expansions, including the current one.

It’s held its show in Anaheim since 1977, except for the years 1998 to 2000—which coincided with ACC’s last expansion—and six of seven ACC upgrades have come since the show started here.

For more on OC’s meetings and conventions please see Monday’s print edition of the Business Journal.