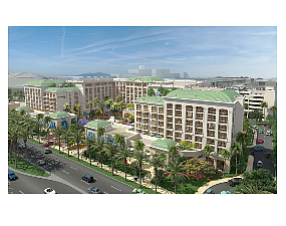 The Anabella Hotel in Anaheim will close in August so its owners can demolish it and build a new hotel.

It currently has 358 rooms that start at $99; the new hotel plan calls for a four-star property with about 630 rooms, at an estimated investment of $225 million.

Anabella is on West Katella Avenue, adjacent to Anaheim Convention Center, and owned by an affiliate of Hong Kong-based developer Wincome Group.

Anaheim Hotel has 302 rooms where rates also start at $99 a night; it’s slated to be redeveloped into a $208-million, 580-room luxury hotel. A construction start date hasn’t been released.

The two luxury hotels, along with one planned by Walt Disney Co., are part of a hotel tax reimbursement deal agreed to by Anaheim in July that totals $560 million over 20 years.