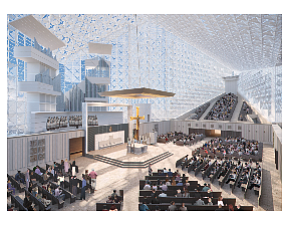 The Roman Catholic Diocese of Orange has received the President’s Award from the Orange County Chapter of the American Institute for Architects for its work on Christ Cathedral in Garden Grove.

The Diocese is in the midst of a $72 million renovation project and needs to reconfigure the building’s floor plan to adhere to the requirements of the Catholic church.

"To date our focus has been largely restorative and in keeping with requisite engineering and other pragmatic construction demands,” said Christ Cathedral Rector and Episcopal Vicar, Rev. Christopher Smith.

The Diocese of Orange is the 12th-largest in the U.S. and plans to start using Christ Cathedral and its campus as its seat in 2019.

The Diocese acquired the cathedral and campus from Crystal Cathedral Ministries for $57.5 million in 2012.

Schuller’s Crystal Cathedral Ministries built the cathedral. It lost the building when it declared bankruptcy in 2010.