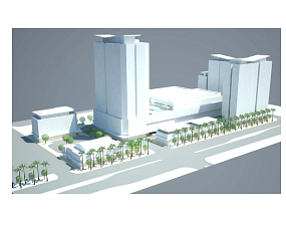 SCG America has been named to develop the Grove District Hotel Resort Development, a stalled 5-acre resort with up to 769 rooms and 39,000 square feet of meeting space in Garden Grove, a press release said.

SCG in October bought the 656-room Hyatt Regency Orange County in Garden Grove for $137 million in an all-cash deal from Xenia Hotels & Resorts, the Orlando-based lodging unit of an Oak Brook, Ill.-based REIT.

SCG, the U.S. affiliate of Shanghai Construction Group, will lead the new joint-venture after a unanimous vote by the City Council Tuesday, according to a press release from Newport Beach-based Maxim Hotel Brokerage.

Maxim represented SCG America in the Hyatt acquisition and in negotiations on the new project.

Maxim President Harry Pflueger said the new resort project at build-out could have up to three towers with three hotel brands and a development value of about $300 million.

The resort was previously approved in Nov. 2012 with Santee, Calif.-based Land & Design Inc. as lead developer. A news report at the time said the company expected to break ground within 18 months.

Land & Design is still involved in the joint-venture that’s now being led by SCG America.

The development is expected to include 20,000 square feet of restaurant space and a parking structure.