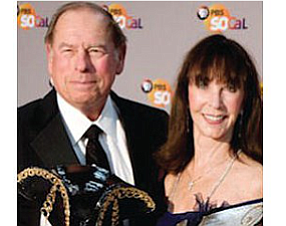 George and Julianne Argyros plan to give $2.5 million to a theater in Julia’s hometown of Adrian, Mich., according to a newspaper there.

The pledge to Croswell Opera House is the venue’s largest gift ever, its artistic director told the Daily Telegram. The Croswell had set a capital campaign goal of $7.2 million; this pledge brings gifts and pledges to date to $7.65 million.

Money raised is set to establish an endowment for and renovate the theater, which opened in 1866. It’s one of the oldest continuously running theaters in the country and is listed on the National Register of Historic Places.

George Argyros is a real estate developer and a former ambassador to Spain. The couple also gave $1 million to the theater in October 2013, along with $1 million to the Adrian Schools Educational Foundation Arts Endowment.