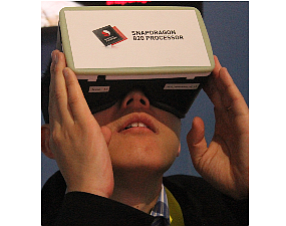 Laguna Beach startup NextVR Inc. will broadcast the Chicago Bulls-Boston Celtics game tonight in virtual reality at a private event at the Cosmopolitan of Las Vegas.

The broadcast and the company’s latest demonstration of VR content—which includes a stroll through New York City’s Times Square—are part of the CES trade show, the world’s largest technology convention that’s expected to draw more than 170,000 attendees this week in Las Vegas.

“It’s been a huge effort … to put our technology on a chip,” NextVR cofounder D.J. Roller said at the Las Vegas Convention Center. “It further speaks to the rapid adoption of VR and enabling of content for consumers.”

Qualcomm is the second-largest chipmaker in the world, with annual revenue topping $25.2 billion. Its Snapdragon chip is carried in about 85% of Android phones. New Android smartphones will carry NextVR technology.

The Business Journal in November reported NextVR raised $30.5 million in Series A funding led by a mix of sports and entertainment firms and San Francisco-based Formation 8, cofounded by Brian Koo, an early investor in Oculus VR Inc.

Oculus had its headquarters in Irvine until its $2 billion sale to Menlo Park-based Facebook Inc. in 2014.

NextVR has recently streamed presidential candidate debates to carve out a niche in virtual reality-based live-event coverage. The company has also worked with news outlets and professional sports leagues that include the NBA, NHL, and NASCAR.