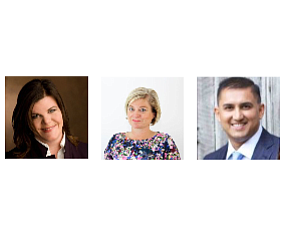 Global Genes in Aliso Viejo expanded its board from eight members to 11 with the additions of Wendy White, Natalie Douglas, and Nauman Shah; White was named chairman and Douglas vice chairman.

White is senior vice president of rare diseases at Dohmen Life Science Services in Milwaukee, Wisc.; Douglas is chief executive of Healthcare at Home near Nottingham, England; Shah is a vice president at Johnson & Johnson in New Brunswick, N.J.

Nicole Boice, founder and chief executive of Global Genes, relinquished the chairmanship but remains on the board.

The nonprofit needed “expanded guidance and expertise,” Boice said. To fulfill its “responsibilities to rare disease patients and families it is critical that we bring together some of the best minds in the industry.”

Commercial genetic testing and services have seen a recent uptick locally with growth at companies that include Ambry Genetics in Aliso Viejo, and Proove Biosciences and CombiMatrix Corp., both in Irvine.

It had $3.6 million in income last year, according to Charity Navigator, which evaluates charities in the U.S.