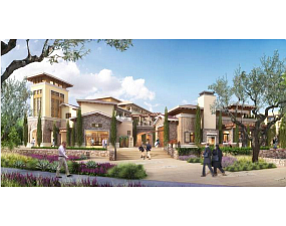 Irvine-based Pacific Hospitality Group plans to break ground April 29 on a four-story, 145-room hotel across the street from its Meritage Resort & Spa in Napa, according to a local news report.

The new hotel, Meritage Commons, will add 10,000 square feet of meeting space, a food and wine village, and a pool.

Reports during the planning process said the new hotel also quadruples the number of suites available between the two hotels, from 10 to about 50. Room rates run about $250 to $300 while suites are expected to reach twice that, reports said.

PHG bought about nine acres for the new hotel four years ago for an undisclosed sum; the land is assessed at $5.6 million, the news report said.

Pacific Hospitality Group owns stakes in and operates 10 hotels, including high-end resorts and branded hotels, most of which are in California.

Five of the 10 are in Orange County, including the 250-room Paséa Hotel & Spa in Huntington Beach, set to open in June.