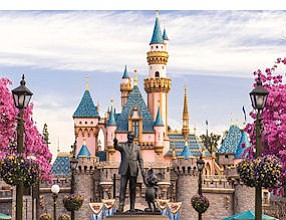 The Parks and Resorts unit posted 6% higher revenue of about $3.8 billion for the most recent quarter, compared with $3.6 billion in the same period a year before. Operating income was $566 million, up 24% from last year’s $457 million.

Disneyland Resort and Walt Disney World Resort in Orlando drove the increase based in part on higher ticket prices and higher room rates at their hotels, the company said, offset by lower operating income at parks in Hong Kong and Paris, and preopening expenses at a new resort in Shanghai.

Walt Disney Co. owned 46% of the Disneyland in Hong Kong, 43% of its resort in Shanghai, and 77% of its Paris property, as of the end of its most recent quarter, the company said. After an in-process recapitalization of Disneyland Paris the company will own at least 54% of that business.

The company reported overall revenue of about $12.5 billion for the quarter, up 7% from $11.6 billion. Operating income in the quarter was $2.1 billion, compared with $1.9 billion last year.

The parks and resorts division revenue increase of about $200 million exceeded a combined $148 million decline in the studio entertainment and interactive divisions and was one-fourth the $812 million boost in overall revenue in the period.