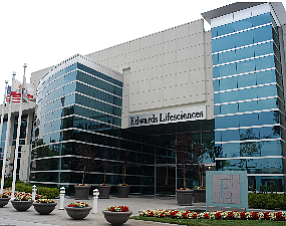 The company's shares closed up 10% today to a market value of $16 billion.

Edwards said in a release that a trial of its Sapien 3 less-invasive heart valve demonstrated low mortality and low rates of valve leaks and strokes 30 days after implanting in high-risk patients. The company also said that final five-year clinical data for patients treated with the first-generation Sapien demonstrated equal outcomes to traditional open-heart surgery as well as durable valve performance.

The studies were presented at the American College of Cardiology's meeting in San Diego.

Another trial that used Medtronic PLC’s CoreValve, a Sapien competitor that was developed in Orange County, also drove the category upwards. That study showed that low-risk patients in a trial in Denmark were no more likely to suffer stroke, heart attack or die a year after receiving a transcatheter valve compared with those whose diseased heart valves were replaced through traditional open-heart surgery.

Edwards’ Sapien heart valve is now approved for use in patients who are deemed high-risk for open-heart surgery.