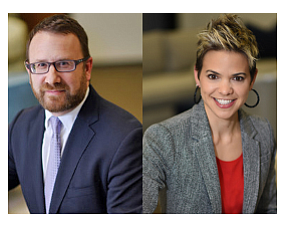 Katz for the past three years has headed Irvine-based Katz Yoon LLP, a boutique litigation firm he cofounded in 2012.

He previously was a partner in the Irvine and Los Angeles offices of Morrison & Foerster. His other stints include working as a law clerk to the Honorable Barbara Crabb, former chief judge of the U.S. District Court for the Western District of Wisconsin.

Marshack also was a partner at Katz Yoon. She previously worked at Morrison & Foerster and Manatt, Phelps & Phillips LLP.

Katz Yoon’s practice has closed. Melissa Yoon, the other founding partner alongside Katz, left the firm in March to serve as general counsel of Aliso Viejo-based Ambry Genetics Corp., a provider of clinical genetic diagnostics.

Greenberg Gross was founded in 2013 by Wayne Gross, former federal prosecutor and Orange County Bar Association president, and Alan Greenberg, a trial lawyer who specializes in high-stakes commercial cases with a focus on finance, real estate and business transactions.

Gross and Greenberg worked together at Greenberg Traurig LLP before starting their own firm.