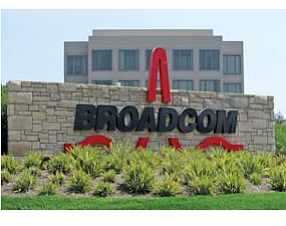 The company, which is set to be acquired for $37 billion by Avago Technologies Ltd., posted revenue of $2.1 billion in the recently ended quarter, up 2.7% from a year earlier.

The company provided guidance on revenue, gross margins, and research and development for the September quarter. It projected revenue between $2.06 billion and $2.21 billion, on the low end of analyst forecasts of $2.24 billion.

Spending on research and development is projected to be between $528 million and $544 million compared to $538 million in the recently ended quarter.

Broadcom said it will no longer hold conference calls following quarterly financial reports due to the pending Avago deal, which would create the world’s third largest chipmaker, with annual sales of about $15 billion.

Broadcom shares were down just under 1% at the close of intraday trading, with a market value of about $30.7 billion.