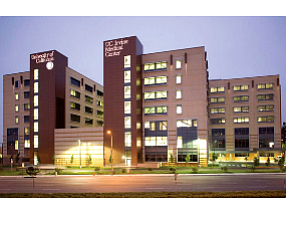 UC Irvine Medical Center and several other Orange County hospitals made the list of the “best hospitals” in California compiled by U.S. News & World Report.

The Orange teaching hospital ranked No. 11 in California and No. 5 in the Los Angeles metropolitan area and was nationally ranked in two specialties.

Other Orange County hospitals that made the U.S. News list include:

Hoag Memorial Hospital Presbyterian in Newport Beach, which was in a five-way tie for No. 27 in California. Hoag tied with a Woodland Hills hospital at No. 11 in the metro area;

Mission Hospital in Mission Viejo, which was in a 13-way tie for No. 40 in California and tied with a Santa Monica hospital at No. 15 in the Los Angeles metro area.

Children’s Hospital of Orange County made the magazine’s list of top children’s hospitals and was nationally ranked in eight specialties.