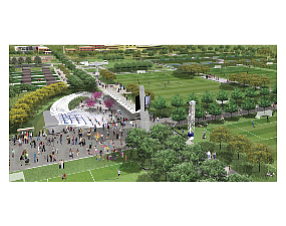 Standard Pacific was one of nine builders selected to build at Beacon Park, a 960-home located next to the Orange County Great Park in Irvine.

The project, going up on land between Trabuco Road and Irvine Boulevard, is expected to open for sales later this year.

It’s the second batch of home development at FivePoint Communities’ Great Park Neighborhoods. The first phase, the 726-home Pavilion Park, opened in 2013 and is in the final stages of sales.

“Beacon Park will be an exciting extension of the innovative planning and design that visitors and homebuyers have experienced at Pavilion Park,” said Emile Haddad, chief executive for Aliso Viejo-based FivePoint.

Standard Pacific and DR Horton Inc. of Fort Worth, Texas, are the only builders involved in Beacon Park that weren’t part of Pavilion Park. Newport Beach-based William Lyon Homes is the sole Pavilion Park builder that’s not part of Beacon Park.

Miami-based Lennar, whose operations are largely run out of its Aliso Viejo office, is an initial investor in the Great Park development.

Financial terms of the lot sales were not disclosed. Real estate sources have estimated that the land sales could bring in between $325 million and $350 million for FivePoint, assuming an average per-lot price in the $325,000-or-higher range.