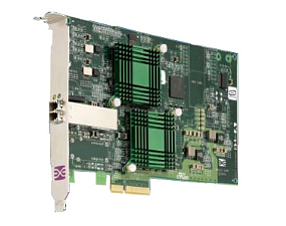 Shares of Emulex Corp. soared this morning in the first trading session since the Costa Mesa-based networking equipment maker announced it would be acquired for $606 million by Avago Technologies Ltd.

Investors sent shares up more than 25.5% to a market value of about $574 million on word of the all-cash transaction, which is expected to close in the second half of the year.

Emulex senior executives and its board, which own about 2.5% of outstanding shares, have signed off on the deal.

Its technology and connectivity business was attractive to Singapore-based Avago, which specializes in networking products geared for the enterprise storage market, according to Chief Executive Hock Tan.

Emulex is the sixth largest computer products maker in Orange County, with 344 local employees out of a 1,176 worker base as of last April, according to Business Journal research.

The company posted revenue of $447 million in the 12 months through June, the end of its fiscal year.

Emulex has long been considered a takeover target by industry watchers and has a history of activist investors that have pushed for a sale. Its networking technology has been coveted in the industry as it suffered from a widespread leadership flux and subpar financial performance over the years, particularly after rebuffing a $912 million takeover offer by Irvine-based chipmaker Broadcom Corp. in 2009.

In April 2013, it staved off a proxy battle with its largest shareholder, New York hedge fund Elliott Management Corp., through the appointment of two directors.

The hedge fund joined a chorus of shareholders who opposed the company’s $120 million buy of New Zealand-based Endace Ltd., which makes technology designed to record, visualize and monitor network traffic.

The tumult came to a head about a year ago with the ouster of Executive Chairman and former Chief Executive Jim McCluney, who took over the top post in 2006 and later moved to the chairman role in a cascade of leadership changes.

Jeffrey Benck, who held the titles of president and chief operating officer, replaced McCluney as chief executive in July 2013.