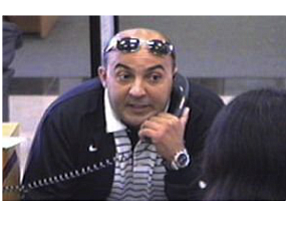 The convicted bank robber who stole the identity—and a $1.4 million tax refund—of Irvine Company Chairman Donald Bren was sentenced to time served, restitution and supervised release, according to court records.

Moundir Kamil, dubbed the “Give Me More Bandit” for his part in a series of 2003 local bank robberies, was arrested in 2010 on suspicion of being behind a bank and identity fraud case involving Orange County’s wealthiest and most prominent businessman.

He later pled guilty to charges of bank fraud.

Kamil is said to have set up an account at the Cerritos branch of East West Bank under Bren’s name in 2010. He then withdrew most of Bren’s stolen quarterly tax refund, before being apprehended.

It has never been explained how Kamil—who listed his occupation as a “smoke shop” operator when setting up his East West bank account—came into possession of Bren’s tax return.

Kamil was ordered to pay $1.1 million in restitution and serve three years of supervised release. He was also sentenced to 99 days in federal detention, for time he previously served, according to court records released this week.

Restitution of the $1.1 million will be paid “in nominal monthly payments of at least 10% of the defendant’s gross monthly income, but not less than $200,” according to a court order.

The victim list “shall remain confidential to protect the privacy of the victims,” according to the court order.