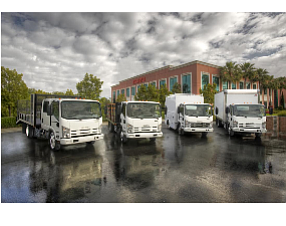 Aliso Viejo-based Telogis Inc. didn’t have to go far to land its latest software deal with a major automaker.

The company inked an exclusive agreement with Isuzu Commercial Truck of America Inc. to supply the Anaheim-based company with new telematics systems in a bid to improve the fleet’s connectivity services.

The Isuzu commercial truck division, a part of Isuzu Motors Ltd. in Tokyo, is among the largest sellers of low-cab forward trucks in the U.S. since the mid 1980s, according to the company.

The Isuzu deal is the fifth partnership with a large maker of commercial vehicles for Telogis, which has been one of the fastest-growing companies in Orange County in the past few years. Executives told the Business Journal that they expected sales to hit $100 million last year.

The latest development follows a couple of recent deals for Telogis. The company signed its first software contract with the U.S. unit of Hino Motors Ltd., the third largest truck maker in the world. Telogis also secured a small strategic investment from Detroit-based private equity firm Fontinalis Partners LLC, which is co-founded by William Clay Ford Jr., the executive chairman of Ford Motor Co. and the son of the owner of the Detroit Lions.

Telogis turned heads late last year when it raised $93 million in a Series A funding round led by Menlo Park-based investment firm Kleiner Perkins Caufield & Byers. The investment was believed to be the largest any OC company received in a funding round last year.

Telogis’ first significant deal came in 2011 when it embedded its telematic software in Ford’s commercial trucks and vans, allowing its fleet customers to manage vehicles remotely through a website.