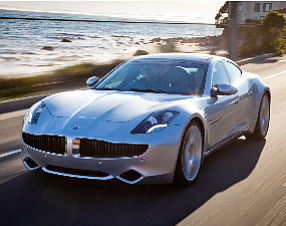 Henrik Fisker is expected to announce plans for a new muscle car with a body made of carbon fiber during an appearance at the Los Angeles Auto Show today.

Henrik Fisker is working with Los Angeles-based Galpin Motors Inc. on the project, according to Beau Boeckmann, the auto dealeship’s president and chief operating officer.

“He’s probably one of the greatest automotive designers of all times and we are honored to work with him,” Boeckmann said during an interview on KROQ’s Kevin and Bean Show. “[Carbon fiber] is a very lightweight but strong material. Traditionally it’s been extremely expensive so it was used very sparingly. Now prices are coming down so you are seeing more and more cars made out of carbon fiber.”

Boeckmann didn’t provide any details on whether the new vehicle is intended for production on a specialty or mass basis.

Henrik Fisker founded Fisker Automotive Inc. in Anaheim in 2007. The company designed and sold several thousand of its luxury-hybrid Karma vehicles, according to industry estimates, before it fell into bankruptcy in 2013.

A unit of China-based Wanxiang Group Corp., recently bought the company’s assets out of bankruptcy for about $150 million and appears to be in the process of restarting operations as Costa Mesa-based Fisker Automotive and Technology LLC.