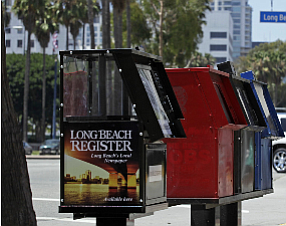 Freedom Communications Holdings Inc. in Santa Ana is reducing the frequency of its Long Beach Register from six to one day a week and plans to furlough an undisclosed number of staff, according to well-placed sources.

The Santa Ana-based media company, which also owns the Orange County Register, started the Long Beach publication in August, and purchased the daily Press-Enterprise in Riverside for $27.3 million in November. It laid off 74 newsroom staffers at the Register and the Press-Enterprise shortly after the acquisition.

It reverted to a weekly publication schedule for its community newspapers that serve Irvine, Newport Beach and Costa Mesa about the same time. The changes in frequency for Irvine World News and the Current came less than a year after Freedom relaunched them as Monday-through-Friday supplements to its Orange County Register.

Freedom also recently reached a deal to sell the bulk of the land it owns around its Santa Ana headquarters to William Lyon Homes in Newport Beach. Real estate sources peg the likely purchase price in the $40 million range.