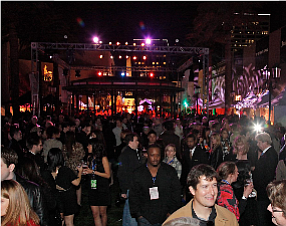 The Newport Beach Film Festival, less than a month from curtain call, has launched an ad campaign to “celebrate the power of film and its ability to change people in unexpected ways.”

“For 15 years the Newport Beach Film Festival has pushed the envelope for what festival promos can be and what film festivals can do,” Todd Quartararo, cofounder and director of marketing for the event, said in a news release. “RPA has been our partner, each year bringing more and more prestige to the festival, and has helped position us as a key American film festival featuring the best films from around the globe.”

RPA also recruited collaborators who donated their time. Print ads, which will run in April issue of Esquire magazine, were created by Radio Co., Ltd. in Cape Town, South Africa. The campaign also includes out-of-home and festival advertising, as well as a two-minute trailer “Bedtime Story,” starring the festival’s projectionist. In the video, he’s “under the influence” of his profession and tells the scenes from films such as “Fargo,” “Her,” “Memento” and “Pulp Fiction” as a bedtime story for his young daughter.

The video was directed by Tool of North America’s Tom Routson, who has worked on famous ad campaigns such as Budweiser “Lizards” and “Got Milk?” It will run on the festival’s website and its YouTube channel.

“Great film is mind-expanding, so we want the way we talk about it to be mind-expanding, too,” said Joe Baratelli, RPA’s chief creative officer. “For the last five years, RPA has worked with the festival to re-imagine what a film festival promotion can be. Our mission has always been to find whitespace to help them stand out, and to differentiate them from a circuit of other festivals that tend to be too serious, safe and ordinary. It’s work that crosses the line beyond advertising, and into a more unexpected place.”

The festival will showcase movies at theaters in Newport Beach and Costa Mesa, from April 24 to May 1.