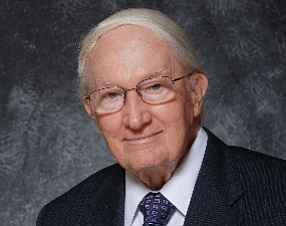 Newport Beach resident Marlan Bourns, whose inventions were instrumental in the Apollo 11 moon landing and Mars Rover expedition, died earlier this month at the age of 93.

The Michigan native’s most adopted invention, the Trimpot trimming potentiometer, was created in 1952. The device, which measures electromotive force, is used for a range of applications today, including controlling the position of patients during MRI and CAT scans, regulating power for cell phone towers and toning electrical guitars.

He earned a reputation for translating complex concepts into devices at the University of Michigan’s machine shop on his way to earning a bachelor’s degree in physics. Bourns’ skills led to his selection for a top secret U.S. Navy program during World War II at the California Institute of Technology. The program eventually became a key part of the Manhattan Project.

Marlan and his wife, Rosemary, founded Bourns Laboratories in a single car garage behind their home in Altadena, testing products in the kitchen using the oven and freezer to replicate hot and cold environments.

The couple’s big break came when San Diego-based Consolidated Vultee Aircraft Corp. placed a $17,000 order that included every product the company made.

The products were critical to monitoring flight surfaces, acceleration, hydraulic pressure and altitude in aircraft and guided missiles. Bourns products played a key role in the success of the Apollo missions to the moon, including the sensor in the joystick control to set the Lunar Landing Module down on the surface of the moon, and pressure transducers in astronauts’ backpacks that regulated oxygen.

Other Bourne products have been just as influential.

Its sensors control the acceleration and breaks in automobiles as well steering and stability systems that improve passenger safety. The company’s surge arrestors protect homes and offices against power surges caused by lightning, while its fuses help keep batteries from overheating.

Bourns de Mexico is the oldest maquiladora in Tijuana.

Marlan received numerous recognitions for his accomplishments and was recently honored as a Fellow of the UC Riverside, Bourns College of Engineering. The Bourns family and the Bourns Foundation provided a $6 million endowment, which has grown to $10 million.

Marlan Bourns was remembered for his great sense of humor, his love of games and compassion, the family said.

They are survived by their four children, Gordon, Linda (Hill), Anita (Macbeth) and Denise (Moyles); fourteen grandchildren; and six great-grandchildren.