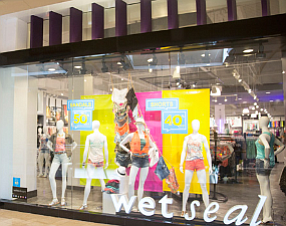 Foothill Ranch-based Wet Seal Inc. said it is looking to raise as much as $27 million in a private placement that would help it grow its e-commerce and plus-size businesses as the company pushes to make headway on a turnaround.

The company also said the capital could "transform our real estate portfolio."

The news, released Thursday after market close, wasn't enough to offset shareholder dismay over a separate announcement that served up disappointing guidance for the current quarter along with results for what turned out to be a rugged February quarter for Wet Seal.

The retailer’s shares were trading down about 15% in afternoon trading Friday to a market value of $126.24 million.

Wet Seal’s strategy was applauded by New York-based Clinton Group Inc., which has a more than 7% stake in the company's stock. Clinton Group sent a letter to Chief Executive John Goodman Thursday in support of Wet Seal’s focus on the e-commerce and plus-size businesses.

Teen retailers faced headwinds last year that marked the final quarter for many as highly competitive with heavy discounting, and Wet Seal said it expects those challenges in the teen retail landscape to continue in the current quarter.

The company's largest retail division for teens is Wet Seal, with 475 stores. It also has a smaller, 57-store chain, Arden B, aimed at young women.

Wet Seal said it expects a net loss for the current quarter between $13.57 million and $16.11 million. Analysts expected a $4.24 million loss.

The loss is based on same-store sales that are expected be down in the mid- to high-teens for the current quarter.

The company did not provide sales guidance.

“The core elements of our 2014 plans include product, merchandising and customer engagement initiatives; driving significant growth in our e-commerce business; transforming our Wet Seal real estate portfolio; and pursuing the significant opportunity we see in the plus-size market,” Goodman said in a statement. “We are moving quickly to execute and believe the new strategic direction will put us on a path to improving our financial results, stabilizing our operating cash flow and achieving long-term growth.”

Wet Seal said it plans to open 10 Wet Seals this year that will be located in mostly outlet centers, while shuttering 17 as those leases expire.

Thirteen Arden B stores are expected to close as those leases also expire.

The guidance followed a tough February quarter for Wet Seal..

The company had an adjusted net loss of $19.5 million, widened from a $4.8 million loss a year earlier.

The company's net sales for the February quarter fell nearly 23% from the year-ago period to $124.8 million. It fell short of Wall Street analyst estimates of $134.74 million.

Same-store sales for the February quarter were off 16.5% for the company’s combined divisions, led by a 25% decline on the Arden B. side.

Comparable sales for the year were off 4.1%.

"Although we concluded fiscal 2013 with a difficult fourth quarter, we made substantial progress during the year against our turnaround strategies, which provides a strong foundation for the business,” Goodman said.